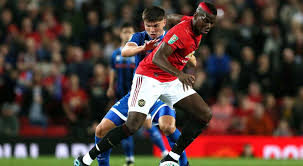 Manchester United squeezed through to the fourth round, 5-3 on penalties, Daniel James confidently dispatching the clincher on a night when League One Rochdale gave Ole Gunnar Solskjær’s men an almighty scare.

United had been taken to spot-kicks by a 16-year-old right-back named Luke Matheson, who will long remember his 76th-minute equaliser then sprinted to celebrate in front of the travelling Rochdale fans he had sent into ecstasy.

Mason Greenwood’s earlier strike appeared to have won this tie but Ole Gunnar Solskjær’s team were made to pay for a lack of ruthlessness in front of goal.

Solskjær retained only Aaron Wan-Bissaka and Andreas Pereira from Saturday’s defeat at West Ham. The headline inclusion was Axel Tuanzebe who, at 21, captained United in only his 10th appearance. He was the youngest to do so since a 20-year-old Norman Whiteside, in 1985. The manager’s move came despite this being Paul Pogba’s first start for close to a month because of injury.

Brian Barry-Murphy’s Rochdale team are 17th in League One, six points above the drop zone after nine games, yet reached the break on level terms.

Of particular interest was how Greenwood might perform in his first game as United’s No 9. The 17-year-old would have had a clear chance if Pogba had turned a far-post header to him. Moments later, he was put in along the left by Pogba again but Greenwood’s control faltered. It was the France World Cup winner who had the next opportunity yet, after Robert Sánchez, the visiting goalkeeper, scrambled a clearance, he blasted over.

All of this signalled United were warming up. An attack near the Rochdale area featured first Tahith Chong, then Pereira hitting swerving shots that Sánchez only just managed to repel.

As the clock passed 25 minutes United dominated but could not break through. Pereira produced the best moment of the half with a curving cross that found Marcos Rojo far from his left-back berth. Yet the Argentinian’s close-range diving header was kept out by Sánchez.

United seemed to be moving closer to the breakthrough: Greenwood crossed the ball in from the right, yet when Pogba had the goal in front of him his header was misdirected – a woeful miss. There was more of the same from the midfielder as the interval neared. This time he tried to score from 35 yards out – and failed, wildly. This summed up an average 45 minutes from United: possession was theirs but they lacked the class to make it count.

In the second half Brandon Williams made his debut, replacing Phil Jones in a defensive reshuffle that had the 19-year-old slot in at left-back and Rojo move to central defence. There was about to be a serious scare for the rearguard. Seemingly hypnotised, it could do nothing as Ollie Rathbone – once of United – found Callum Camps and suddenly Wan-Bissaka had to frantically clear from the line.

This had the packed away end delirious and the home support wondering what, precisely, their team was doing. The answer was failing to find any kind of urgency and thus allowing Rochdale to start believing the upset was on. Greenwood could perhaps be excused this general charge as he continued to pop up near Sánchez’s goal.

The sign of United’s desperate times came on the hour when Solskjær replaced the toothless Chong with Daniel James and his impact was instant, laying off a pass to Greenwood, whose shot forced Sánchez to concede a corner. Williams was instrumental. His turn of pace allowed him to break and his simple layoff found Pereira, who relayed the ball to Jesse Lingard and when Greenwood took over his shot made it 1-0.

Yet now came the twist as Matheson raced in from the right and buried a finish past Sergio Romero and so penalties beckoned. Rochdale missed their second kick but all United’s kept their nerve, with James finally clinching victory with the fifth.