Policemen attached to the Osun State Joint Task Force, JTF to enforce the compulsory use of face masks in the state have brutalized Sikiru Obarayese, a DAILY POST’s correspondents attached to the state, while covering the process.

Obarayese was beaten at the popular Old-Garage area of Osogbo, the state capital, alongside an aged woman and other members of the public.

Obarayese who sustained injuries on his left elbow and right ankle, said the operatives beat him up while covering their activities in the presence of the State Commissioner for Local Government and Chieftaincy Affairs, Adebayo Adeleke.

Our Correspondent gathered that a policeman attached to the JTF approached the reporter, and asked him to stop taking pictures when the task force was harassing some of the members of the public and beating people with baton. 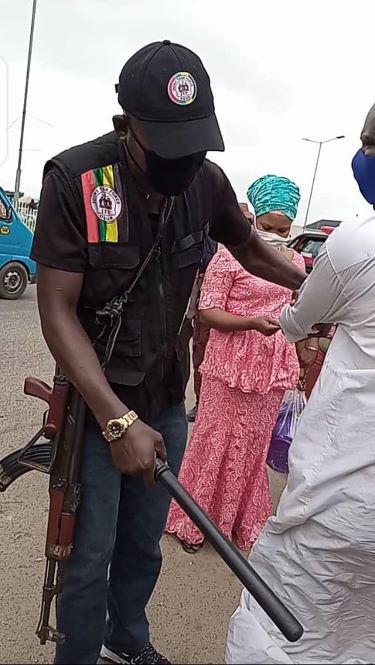 Some other residents of the state were also harassed by the security officers who were  mandated to enforce compliance.

Obarayese in his account said, “I was taking pictures with my phone when the operatives were harassing those who didn’t use face masks. A woman was reporting that they had beaten her, and I was recording the woman.

“The Joint Task Force led by the Commissioner for Local Government and Chieftaincy Affairs, Adebayo Adeleke, approached me, asked why I was taking pictures. I told them it was a public place and I also informed them that I was a journalist.

“In the course of bringing out my ID Card from my pocket, a policeman attached to the JTF said, ‘you are mad, where is your ID card’  and wanted to snatch my phone.

“Four policemen attacked me and started  slapping and hitting me with a baton in my hands and legs with the aim of destroying the phone. I fell and they were matching me.

“To my surprise, I heard the Commissioner for Local Government and Chieftaincy ordering them to beat me and take me along with those they had arrested.

“I was later released when some journalists at the venue approached them.”

Meanwhile, Osun State Commissioner for Local Government and Chieftaincy Affairs, Prince Adebayo Adeleke has described as a lie of the century, the report that he ordered the beating of a journalist.

In his reaction to the allegation, Adeleke said, the reports on the matter were based on hearsay that was not close to the truth, and seemed to have been designed to malign the enforcement process.

According to him, what happened was the enforcement of the guidelines against the spread of COVID-19, which involved arresting and prosecution of violators before the court.

According to the commissioner, when found guilty, they would only be made to do a community service work with a view to ensuring that they comply and prevent community transmission of COVID-19 in the interest of all citizens.

“May be the guy making the allegation believes that his story will not sell if the issues of enforcement is not brought in.

“The reporter who was making the allegation knew that he was not the only journalist at the scene, other journalists from other media houses were there. The question is why only him? It is even a thing of joy that we have journalists on ground covering the activities because we want the message to go far.

“We are not doing anything illegal, why are we going to prevent journalists from covering it. Therefore, whoever believe his allegation can believe anything under the sun.

“To prove that he was actually telling lies, at the time he claimed he was being treated at the hospital, there was an information that he was sighted at a party behind Bovas filling station in Osogbo in a joyous mood with his friends and others.

“The government of Osun and any of its officials, including myself would never trample on the right of any citizens, journalist or not, because we are law abiding.

“We are therefore calling on the people to comply with the Covid-19 preventive guideline, as a way of supporting government in the fight against the spread of the virus”, Adeleke stressed.

Adeleke added that the report by some media houses that he could not be reached on his mobile phone was another lie from those who reported the matter, saying, “I can count more then six journalists who called me for clarification and I told them what transpired.”

“To report that I could not be reached was another lie from the pit of hell”, he added.

THE CONCLAVE established that Obarayese was treated at the State Specialist Hospital, Asubiaro, Osogbo.

Ozekhome has good things to say about T.B. Joshua that set...

PDP slams Buhari’s Presidency over 2023 comments, says it smacks of...