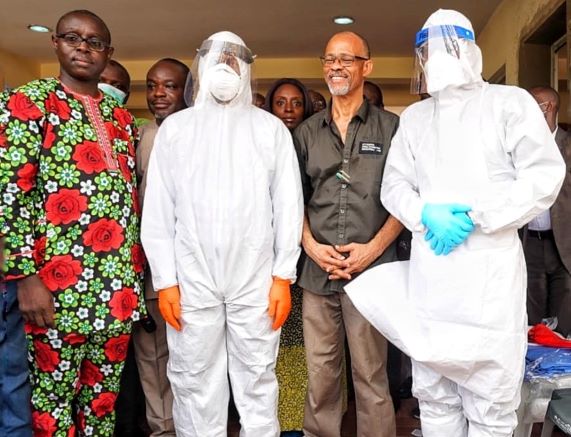 Chief Incident Commander for the counter measures against Coronavirus (COVID-19) outbreak in Lagos State, Governor Babajide Sanwo-Olu, has again re-assured Nigerians that the State remained committed to every effort geared towards preventing the human-to-human transmission of the virus, following the index case reported last Friday.

The Governor said both the State and Federal Government healthcare officials had been working round the clock with infectious disease control professionals from the international agencies to ensure the counter measures being deployed to contain the virus achieved the desired results.

Sanwo-Olu spoke on Sunday during his visit to the State-owned bio-security and containment facility at Infectious Disease Hospital (IDH) in Yaba, Lagos Mainland, where the Italian national diagnosed with COVID-19 is being managed. Deputy Governor, Dr. Obafemi Hamzat, and Commissioner for Information and Strategy, Mr. Gbenga Omotoso, accompanied the Governor on the tour of the facility.

Sanwo-Olu said he was highly confident in the response approach initiated by the State’s Incident Command Centre in the wake of the outbreak of the virus, expressing optimism that the nation would survive the epidemic and put it behind.

He said: “Let me express a confession that I am very delighted with the level of preparedness and our response to stop coronavirus from spreading in our country. The kind of structures we have put in place and the strategies being deployed have raised my confidence that the nation, at the end of the day, will win this battle and will put it behind. I keep on expressing to the Commissioner for Health that we must stop at nothing to achieve the very best result.”

Sanwo-Olu said the State had already upgraded its isolation facilities at the IDH in the case of escalation in the number of cases, revealing that two additional containment centres had been created with 80 bed spaces and necessary medical equipment to manage cases. Also, there are two mobile isolation wards of 15-bed capacity each stationed in the hospital.

Reacting to the report of scarcity of sanitary materials at pharmacy shops across the State, the Governor condemned the action, saying it was wicked for people to take the advantage of emergency situation to hoard and jerk the prices of face mask and hand sanitizer.

He said: “This should not be the means for anyone to enrich themselves. It is unfortunate people are hoarding these important sanitary materials. We need to speak to ourselves. People are just abusing a rare opportunity, because the outbreak is not an event everybody wishes for. I think it is unacceptable for people to sell above the prices they used to sell before the outbreak. These people should search their conscience and ask themselves what kind of people are we. We should be our brother’s keeper.”

Sanwo-Olu also frowned at misinformation trailing the COVID-19 case being managed at the IDH, saying the public deserved to get accurate information about the management of the patient in isolation. He urged the media practitioners to approach the appropriate quarters for updates and developments on the case being managed.

“Our citizens need to be calmed and assured that the professionals deployed to handle the virus outbreak are constantly on the ground to do it. The media should communicate and give accurate report to our citizens to let them know that authorities and the professionals that need to be on ground are working tirelessly to curtail the virus,” he said.

Sanwo-Olu said the State Government had stepped up the level of sensitisation and advocacy among residents at the grassroots, disclosing that the effort would be followed up by a series of stakeholders’ meetings in the week.

He said he would be meeting with Governors of neighbouring States on Monday to draw up strategies in scaling up advocacy on the virus among people and also to design more community-based approaches that would prevent the spread of the virus. There also would be meetings with local government officials and transport workers’ unions, the Governor said.

Commissioner for Health, Prof Akin Abayomi, likened the State’s response towards containing the outbreak of COVID-19 as “a war”, saying Lagos had deployed three levels of counter measure to stop the spread of the virus, which include medical, security and research.

He disclosed that Lagos and Ogun governments were constantly exchanging information, following the outbreak, adding that the movement of the index case had necessitated more cooperation between the two States.

Abayomi, who is a professor of Bio-security Technology, said Lagos Government did not want the virus to spread to other States, which was why it deployed funds and personnel to break the cycle of transmission.

“We are always in a state of extreme readiness and one step ahead of the virus. We are doing everything within our power to break the cycle of transmission of the virus in our land,” the Commissioner said.

Lai: The most dangerous minister in Buhari’s cabinet, By Frederick Nwabufo