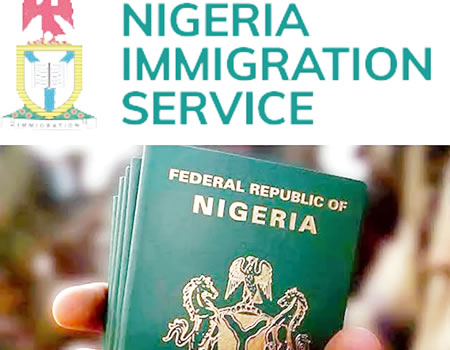 The Nigeria Immigration Service (NIS) has appealed to travellers to comply with the clearance procedures at the airports to help reduce the spread of COVID-19.

The appeal was contained in a statement issued on Monday in Abuja by NIS Public Relations Officer, Mr Sunday James.

It stated that Hassan had help to installed sanity by operating an airtight entry and exit points that had resulted in various arrests.

According to the statement, the outgoing year birthed a global pandemic, COVID-19, that has prompted nations to enforce mandatory lockdowns and border closures.

“NIS, as the lead agency in charge of migration control and border management at the Nnamdi Azikiwe International Airport (NAIA), had to step up personnel protection to insulate them from contracting COVID-19.

“The personnel protection insulate was done through the installation of glass shields that separate the operatives from passengers, use of face masks, hand gloves, hand sanitisers, among others.

“Similarly, 81,277 Nigerians and 37,590 non-Nigerians arrived through NAIA airport within the period under review. A total of 625 Nigerians were deported and 24 repatriated for various criminal and immigration related offences.

“In the same vein, 12 foreign nationals who failed to comply with Nigerian entry requirements were refused admission and returned,” the statement revealed.

It added that 34 Nigerians, predominantly young ladies, were refused departure for non-compliance and violation of immigration regulations and other extant laws.

According to the statement, the young ladies were victims of human trafficking being transported for the purpose of forced prostitution and sex exploitation and were between the ages of 18 years to 28 years.

It added that their final destination was Dubai, United Arab Emirates and that upon interception, they were profiled for further investigation and later released to the National Agency for the Prohibition of Trafficking in Persons, for rehabilitation.

It said that the change of operational strategy at the NAIA led to the uncovering of the people recruiting and trafficking these ladies via sting operation of the NIS.

According to the statement, six recruiters and traffickers were apprehended with four males and two females, and that the identity of three of the recruiters and sponsors, resident in Dubai, were equally uncovered.

It said that the NAIA Command, within the period under review, received and handed over 100 Nigerians whose offences are not immigration related to relevant agencies.

According to the statement, such unrelated immigration offences are drug issues, financial crimes, trafficking in persons and smuggling of migrants.

It added that the various achievements during the period under review were achieved through the transformation agenda of the Comptroller General with the deployment of Migration Information and Data Analysis System (MIDAS).

It said that the adoption of MIDAS had helped to enhance air border management at all the airports, adding that with the deployment of the veritable platform, the airport command had been experiencing smooth and seamless passenger processing. (NAN)

FCTA releases guidelines on re-opening of places of worship

My marriage crashed because my husband thought I was barren- Homto,...