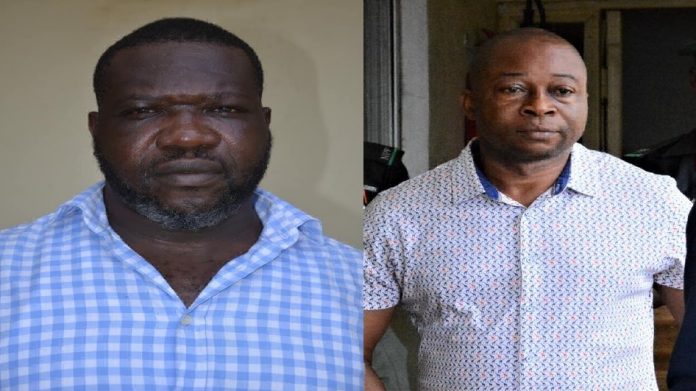 Justice Darius Khobo of the Kaduna State High Court, Kaduna, on Thursday, (October 15, 2020) convicted and sentenced one Nuhu Aliyu for fraud.
Aliyu, a staff of Nigerian National Petroleum Corporation, (NNPC)/Nigerian Pipeline and Storage Company Ltd (NPSC) and Chairman, PENGASSAN PPMC Kaduna Depot Branch, defrauded the NNPC to the tune of N1,834,900.00 in October 2017.
He was prosecuted by the Kaduna Zonal Office of the Economic and Financial Crimes Commission, EFCC, on amended one-count charge of criminal breach of trust and abuse of office to which he pleaded guilty.
Following his guilty plea on Friday, prosecution counsel Y.J.Matiyak, tendered 11 documents that were admitted as exhibits and urged the court to convict and sentence him accordingly.
He was convicted and sentenced by the judge to pay the sum of N100,000 to the federal government or risk a 10 years jail term.
Justice Khobo further pronounced that the EFCC should recover the proceeds of the crime from the convict and transfer it in favour of the PPMC.
The convict pulled off the fraud by summoning an emergency meeting of some NUPENG executive members, and deliberately leaving out some others with the sole aim of having the liberty to process some payments to himself. Though the meeting did not hold, he went ahead to facilitate the payments to himself by splitting the payments into two.
The first (payment) to himself, (was) to the tune of N934,900 (Nine Hundred and Thirty-four Thousand, Nine Hundred Naira) and the second to Muktar Aliyu, NUPENG’s secretary in the state, to the tune of N900,000.00.
Muktar Aliyu, however, routed back the sum to Nuhu Aliyu, thereby making the chairman the sole beneficiary of an illicit payment of N1,834,900.00 (One Million Eight Hundred and Thirty-four Thousand, Nine Hundred Naira).
It was further discovered that to facilitate the payments, the convict with the help of one Ibrahim Yakubu Shekarau, forged the signatures of some other NUPENG officials.
In a related development, the Kaduna Zonal Office of the Commission on Tuesday, October 13,2020, arraigned one Christopher Nduka before Justice Khobo on a two-count charge, bordering on issuance of dud cheque to the tune of N397,500.
The defendant was remanded in custody following the failure of his counsel, Simon Nnadi to formally file a bail application for his client.
However, at the resumed hearing on the matter today, the defence counsel informed the court that he has filled the defendant’s bail application and urged the court to grant bail to client on medical ground to enable him prepare for his trial, while prosecution counsel, Y.J.Matiyak opposed the application on the ground that the defendant is a habitual issuer of dud cheques, at such would likely go back to the crime if released on bail.
Justice Khobo granted the defendant bail in the sum of N4 million with one surety in like sum, who must be a resident of Kaduna State, and must have a landed property within the jurisdiction of the court.
The surety must also submit the Certificate of Occupancy (CofO) of his land to the court, verified by the EFCC.
The case was adjourned till November 16, 2020 for continuation of trial.
Trouble started for Christopher when he allegedly issued two cheques to one Santos Abu Attah in the sums of N265, 000 and N132, 500 respectively, for the purchase of 150 bags of cements.
However, when the petitioner presented the cheques at the bank for payment, they were dishonoured due to insufficient credit in the accounts.
Please follow and like us: