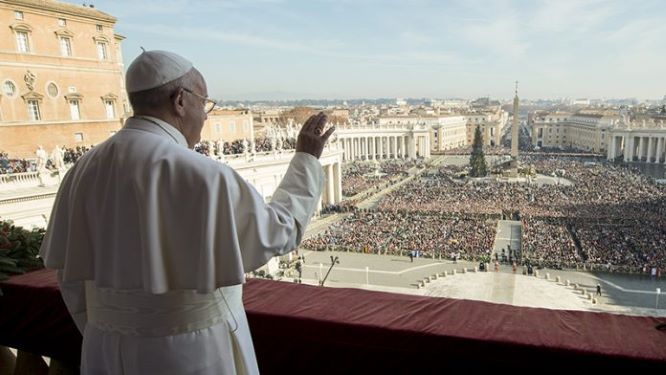 Pope Francis will not lead any public celebration for Easter due to the coronavirus, the Vatican said on Sunday, a move unprecedented in modern times.

“All the Liturgical Celebrations of Holy Week will take place without the physical presence of the faithful,’’ a statement from the Prefecture of the Pontifical Household said.

The celebrations will still take place, but in ways that have yet to be defined in accordance with anti-virus contagion measures, Vatican spokesman, Matteo Bruni, said separately.

Easter, which this year falls on April 12, is the most important Christian holiday, celebrating the resurrection of Jesus.

There are several ceremonies leading up to it, during a so-called Holy Week.

One of the most solemn is a Good Friday evening procession by Rome’s Colosseum, the Way of the Cross, led by the pope and attended by thousands of worshippers.

Another key event is the Holy Thursday’s foot-washing ceremony, which Francis has performed in the past in prisons, migrant detention centres and hospices for the disabled.

The Vatican’s decision “opens up an unprecedented scenario: rites with no people,’’ Massimo Faggioli, a professor of theology and religious studies at Villanova University in the United States, told dpa.

“Francis is facing a situation similar to predecessors, who were popes, while Rome and Italy were riven by war and general upheaval: just in the last two centuries, Pius IX, Benedict XV, Pius XII,’’ he added.

In his Sunday Angelus prayers, which have been broadcast online rather than delivered to crowds in St Peter’s Square since last week, Francis sought to reassure the faithful.

“In this epidemic situation, in which we find ourselves living more or less isolated, we are invited to rediscover and explore the value of communion that unites all members of the Church,’’ he said.

“United with Christ we are never alone, but we are a single body.’’

Francis also thanked priests in Lombardy, the Italian region worst hit by the coronavirus outbreak, for “inventing one thousand ways to stay close to their flock’’.

In Italy, where all church services are suspended, there have been reports about priests leading Mass via Instagram or driving around town reciting prayers through a loudspeaker.

Due to the coronavirus outbreak, the Vatican has previously cancelled Francis’ public engagements and closed St Peter’s Square and the Basilica to the public.

In late February, there was some concern about the 83-year-old pope’s health, as he caught a cold just as the pneumonia-like COVID-19 was spreading across Italy.

The Vatican never confirmed press reports that he was tested for the coronavirus and got a negative result, but in any case, Francis seems to have recovered.

For the weekly audience and the Angelus, this will continue until April 12, the Prefecture of the Pontifical Household, said in its statement.

Public gatherings have been cancelled in countries across Europe as the continent battles with a growing number of COVID-19 infections, which have turned the continent into the world’s coronavirus hotspot.

Italy, the worst-affected country in the world outside of China, where the outbreak originated, reported more than 21,000 cases and 1,441 deaths as of late Saturday.