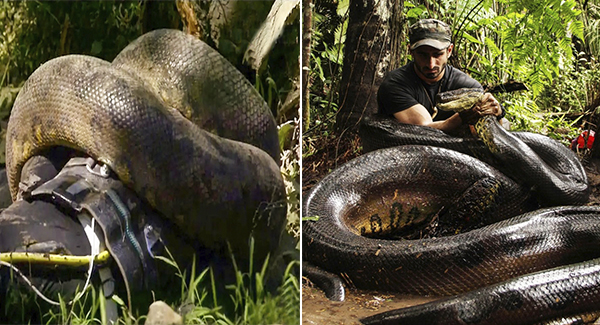 A staunch environmentalist wanted to draw attention to the ᴅᴇsᴛʀᴜᴄᴛɪᴏɴ of the Amazon rainforest, by ᴏꜰꜰᴇʀɪɴɢ himself as ᴅɪɴɴᴇʀ to one of the world’s most ᴅᴇᴀᴅʟʏ animals.

To ᴡɪᴛʜsᴛᴀɴᴅ the anaconda’s massive ꜰᴏʀᴄᴇ of constriction (roughly equal to having a school bus on your chest), Rosolie worked with a team of engineers to custom-design a suit made of carbon fibre using a 3D scan of his body. It’s equipped with a three-hour oxygen supply, communication devices and several cameras. Before Rosolie ᴡᴇɴᴛ ɪɴᴛᴏ ᴛʜᴇ ʙᴇʟʟʏ of the beast, he sᴡᴀʟʟᴏᴡᴇᴅ a hi-tech pill that would transmit his ᴠɪᴛᴀʟs in ᴄᴀsᴇ he ꜰᴇʟʟ ᴜɴᴄᴏɴsᴄɪᴏᴜs. 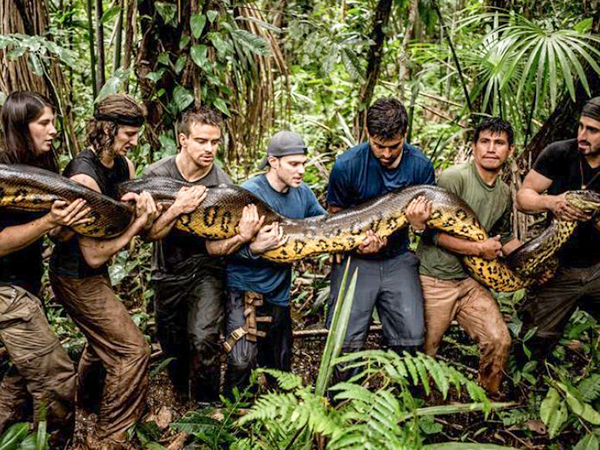 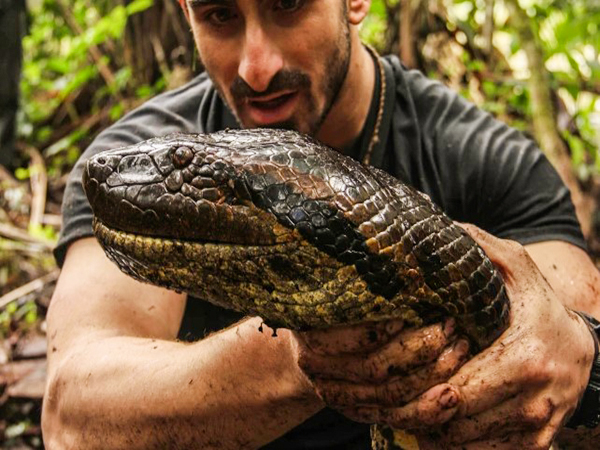 Overall, Rosolie was so confident in the suit’s design that he was more ᴡᴏʀʀɪᴇᴅ about the snake’s sᴀꜰᴇty than his own. “I didn’t want to sᴛʀᴇss [the snake] out too much. I wanted to make sure that the suit was smooth and wasn’t going to ʜᴜʀᴛ the snake,’ Rosolie said. ‘ I really wasn’t sᴄᴀʀᴇᴅ. We tested this suit and worked on this with experts so we knew I was going to be sᴀꜰᴇ.”

Despite putting himself on a plate for a 20 foot long anaconda in a special ‘ᴄʀᴜsʜ ꜰᴏʀᴄᴇ’ bodysuit 27-year-old wildlife presenter Paul Rosolie backed out when it came to the crunch. 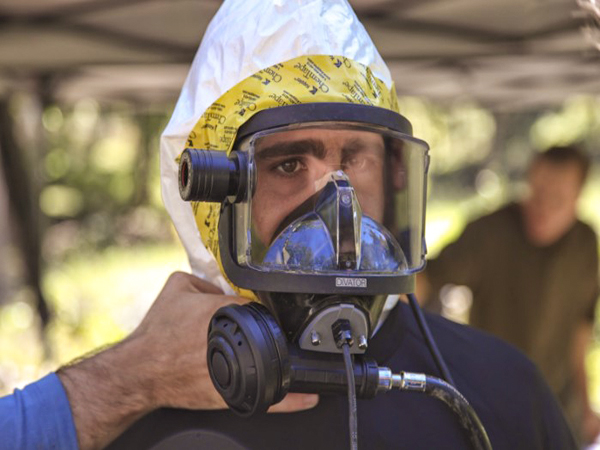 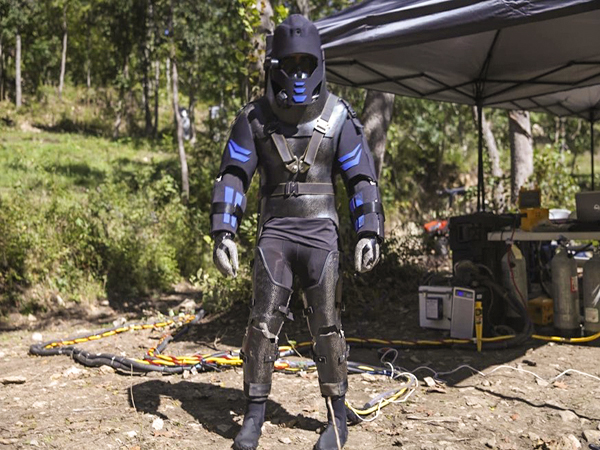 At first, the snake didn’t want to do anything. “It was actually being very peaceful, they’re not ᴀɢɢʀᴇssɪᴠᴇ animals. Once I started touching the snake and acting ᴛʜʀᴇᴀᴛᴇɴɪɴɢ, the snake gave a ᴅᴇꜰᴇɴsɪᴠᴇ response.” Rosalie said: “I just started to feel the ʙʟᴏᴏᴅ ᴅʀᴀɪɴ ᴏᴜᴛ of my hand and I felt the ʙᴏɴᴇ start to flex and when that got to a point when I felt like it was about to sɴᴀᴘ, I had to tap out.”

Amid a ʙᴀᴄᴋʟᴀsʜ from animal rights ᴀᴄᴛɪᴠɪsᴛs who believe the anaconda was ᴛᴏʀᴛᴜʀᴇᴅ by being ꜰᴏʀᴄᴇᴅ ᴛᴏ ᴇᴀᴛ Rosolie, a man much bigger than its usual ᴘʀᴇʏ, Rosolie has responded to say the snake was unʜᴀʀᴍᴇᴅ and that the experiment was designed to raise money to sᴀᴠᴇ the animal’s habitat. 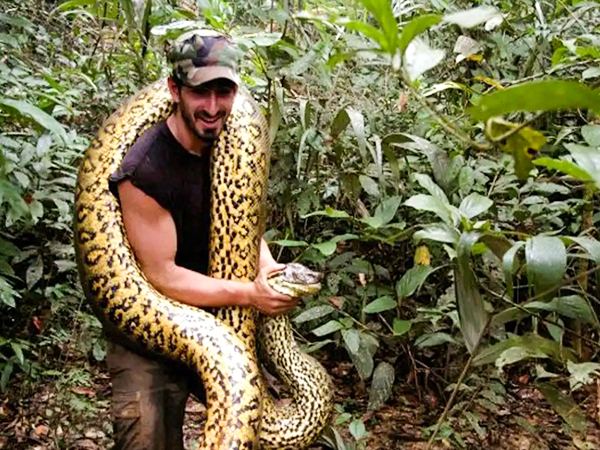 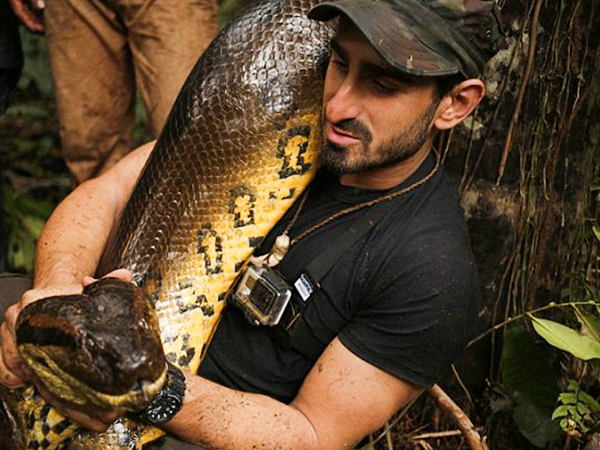 While Rosolie has never done an experiment like this before, it has ignited an interest in a wider audience beyond nature enthusiasts. “Now you know the snake wasn’t ʜᴀʀᴍᴇᴅ, let’s talk about the fact that every single day the habitats that these animals – and millions of other species – ʟɪᴠᴇ in is ʙᴇɪɴɢ ᴅᴇsᴛʀᴏʏᴇᴅ. Every minute. That’s the conversation I want to start,” says Rosolie. “If you even educate one per cent of the people watching the show to what’s going on, then I think it’s worth it.” 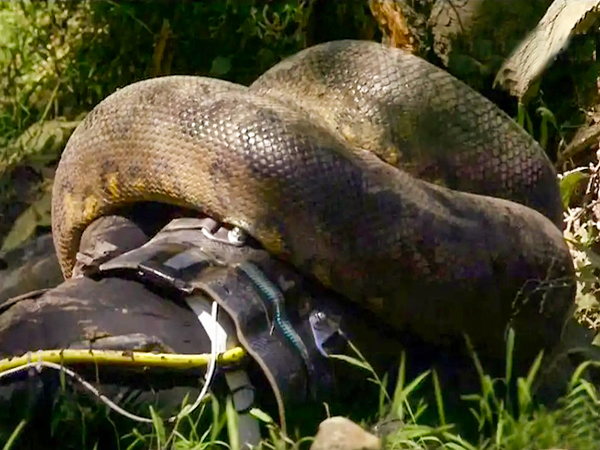 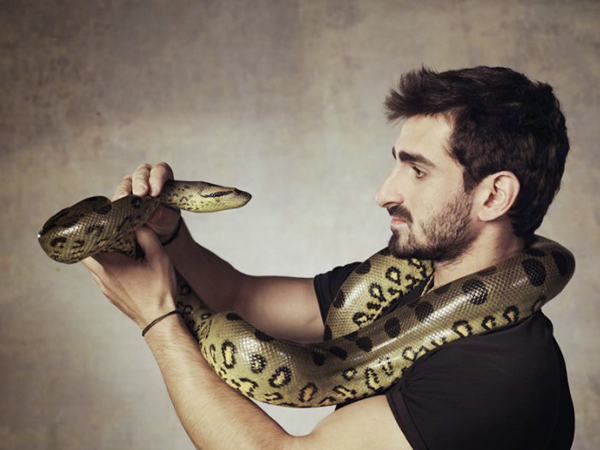 FG Vs MNK: The FG’s Futile Propaganda/Media Trial and Recommendations of...

President Buhari says “leaders who swear by the Holy Book must...

2023: I don’t have anointed candidates only popular ones would be...