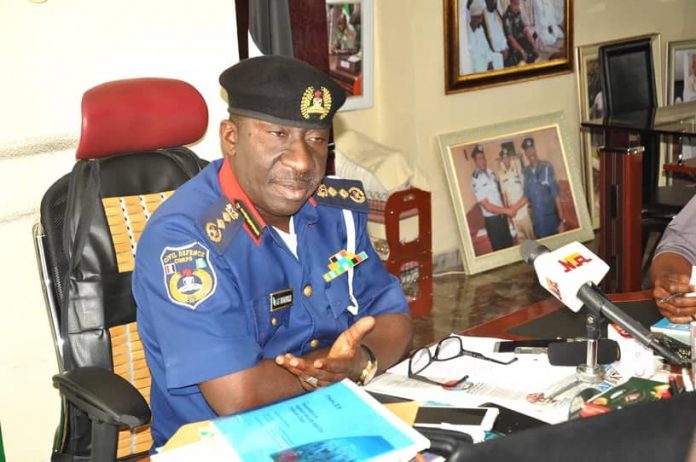 ▪︎Frantic lobbying for an extension of Gana’s Tenure, a reversal of appointment of Hilary Kelechi

There appears to be confusion in the Nigerian Security and Civil Defence Corps (NSCDC), Abdullahi Gana, who was reported to have handed over the mantle of leadership on Monday, has been asked to remain in office pending official communication from the Presidency.

Gana was the erstwhile Commandant-General of the para-military agency until yesterday when he clocked 58 years and following the expiration of his six months extended tenure on January 17, 2021.

A source who spoke to PRNigeria on the matter, argued that there was no official directive from the Presidency for Gana to hand over.

The federal government through the Ministry of Interior had extended the tenure of the Gana by six months in July 2020.

The NSCDC spokesperson, Emmanuel Okeh, had in a statement on July 19 said the Minister of Interior, Rauf Aregbeshola had approved the extension of the tenure of the NSCDC boss for a six-month period effective from July 17, 2020 to January 2021.

A source very close to the NSCDC Boss told PRNigeria that Commandant General still has two years ahead before retiring from service.

“As I am talking to you now, he is awaiting further official directives from the Presidency,” the source said.

PRNigeria also gathered that there is frantic lobbying of powerful individuals at the Presidency to reverse the earlier decision made to appoint the Deputy Commandant General of Commandant-General (CG) in charge of Operation and most senior officer at NSCDC, DCG Hilary Kelechi Madu, as the acting Commandant General of the corps.

According to sources, Madu, who was billed to have taken over from Gana whose extended tenure of six months expired on January 18, 2021, may be forced to wait longer as efforts are made to extend his boss’ stay in office.

Meanwhile, a civil Society Organization, the African Law Foundation (AFRILAW) has called on President Muhammadu Buhari to re-appoint Gana as the Commandant General of NSCDC for a second tenure.

Chinwike Okereke, Founder and CEO, AFRILAW in a statement, said Gana made many great and wonderful accomplishments in the areas of improved the safety and security of critical national assets across the country.

He opined that the CG has performed well in reforming the security sector and is worthy of reappointment while listing some of his accomplishments to include; re-introduction of Agro-Rangers for improved security within the agricultural sector; increased reduction in farmers and herders’ clashes across the country, redeeming the image of Nigeria educationally by partnering with Joint Admissions and Matriculation Board (JAMB).
(PRNigeria)

Lagos Police vow to go after Cmxultists in Ajah, Lekki

Aisha Buhari commends UNFPA on commitment to health of women and...