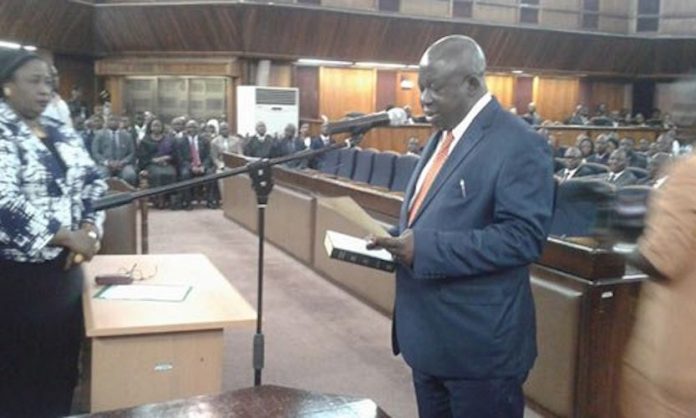 The Chief Justice of Nigeria (CJN), Justice Tanko Muhammad, on Wednesday, swore in Justice Benedict Kanyip, as the acting president of the National Industrial Court of Nigeria (NICN).

NAN reports that on Sept. 27, President Muhammadu Buhari, approved the appointment of Justice Kanyip as the acting President of the NICN.

This is pursuant to the provision of section 254 (B)(5) of the Constitution of the Federal Republic of Nigeria 1999 (as amended).

After Kanyip took his oath, the CJN said it was a constitutional provision that the next most senior justice be appointed as the Acting President of NICN pending the conclusion for the process of the substantive President of the court.

He urged him to exhibit leadership qualities that will distinguish him to be able to shoulder the responsibility given to him.

“Take time to constantly look at the act that established NICN and be a practical man, check all the reports being sent to SCN and be sure they followed due process.

“Go round the divisions under the court and see things for yourself and work well with your brothers.

The CJN pleaded for the cooperation of the members of staff of the NICN in finding solutions to problems of the court’’.

He was appointed a Judge of the National Industrial Court in 2000 for an initial period of four years although with eligibility for a renewal for a further term of four years.

In June 2004, having completed the first term, his appointment for another term of four years was renewed, and he is now a tenured Judge of the Court.

Professor Kanyip attended Ahmadu Bello University, Zaria, for his LLB, and the Nigerian Law School, Lagos, Nigeria for his BL.

He took up a teaching appointment as a Lecturer at the Ahmadu Bello University, Zaria in 1987; and rose to the position of Lecturer II before leaving in 1992 for the National Commission for Colleges of Education as Legal Adviser in the rank of Principal Legal Officer.

In 1995 he was appointed Senior Research Fellow at the Nigerian Institute of Advanced Legal Studies and rose through this appointment to the rank of Associate Research Professor of Law in 2000 when he joined the Court.

He is the author of numerous scholarly articles in the areas of consumer law, labour law, tax law and commercial law.

He is the author of the book, Consumer Protection in Nigeria: Law, Theory and Policy (2005) and a joint author of the text: Elements of Commercial Law (1994).

He was the Presiding Judge of the Abuja Judicial Division of the National Industrial Court of Nigeria.

Police arrest couple in Ogun for selling their baby for N50,000