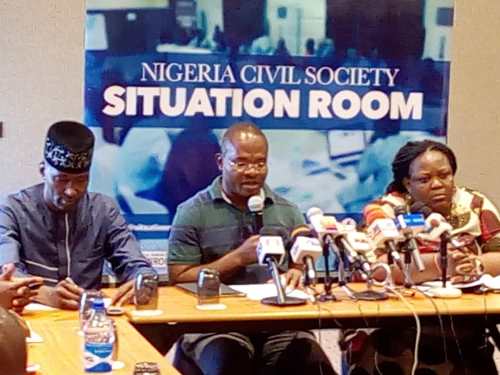 The Nigeria Civil Society Situation Room has called for the cancellation of the entirety of the Kogi state elections conducted Saturday 16th November, 2019.

Clement Nwankwo, the Convener, Nigeria Civil Society Situation Room, who stated this during a press  briefing on Sunday at Abuja, disclosed that the governorship elections conducted in Kogi and Bayelsa  states represent a major setback for Nigeria’s electoral democracy.

Nwankwo said the Situation Room received reports of late commencement of polls in several polling units across the two states of Bayelsa and Kogi.

He lamented that the violence witnessed in the two states were unprecedented, alarming and raised questions about the credibility of the elections, adding that this is contrary to expectations of Nigerians who thought  that lessons learnt from the 2019 general elections would translate to improvement in conduct of these elections.

He pointed out that the INEC also raised concern that the security services attached to support the elections did not provide back up to enable some of its staff start out at the stipulated time, adding that t his resulted in several delays.

Other concerns that he raised were issues bordering on lack of adequate logistics in terms of provision of security for transportation of election materials to their destinations, among others.

In the light of the above and other critical concerns in the conduct of elections in both states, especially in Kogi state, the Situation Room called for the cancellation of the entirety of the elections in Kogi state.

“Situation Room is disappointed with conduct of the two governorship elections that held in Kogi and Bayelsa states and worries that the elections fall below the standards expected for a free and credible elections.

“With particular reference to the elections in Kogi state, the level of violence perpetrated by the two major political parties and politicians, evident sometimes in the collision with security personnel, seriously undermined the elections, deterred voters and made the exercise a farce.

“Accordingly, Situation Room is calling for the cancellation of the entirety of the Kogi state elections conducted on 16 November, 2019.

He also decried the high level of violence perpetrated by political parties in collusion with security personnel in the governorship elections of Bayelsa state, adding that this has resulted in what he called ‘community voting’

He explained that community voting is a practice whereby political parties controlling particular areas compel overwhelming votes in favour of their party.

He therefore called on INEC to fully interrogate the elections in Beyalsa state with a view to identifying the high incidences of malpractice that took place and reflect the genuine vote of the people.

“In the light of the security failures, violence, thuggery and general abuse witnessed in the elections, Situation Room calls for urgent passage and implementation of an electoral offences commission law to address all issues related to electoral abuse,” he said.

The Situation Room is made of Civil Society Organizations (CSOs) working in support of credible and transparent elections in Nigeria and  includes such groups as Policy and Legal Advocacy Center (PLAC), CLEEN Foundation, YIAGA Africa, CISLAC, and Action Aid Nigeria, among others.

Tordue Salem: Police responsible for delay in notifying family of his...

Nigerian Air Force and its crashing planes, By Reuben Abati