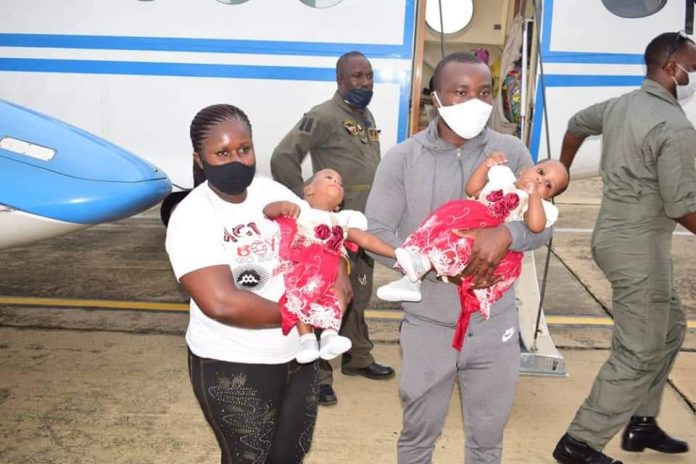 In fulfillment of the promise made on January 2, 2020, when they were airlifted from Yenagoa, Bayelsa State to Yola in Adamawa State, the Nigerian Air Force (NAF) has airlifted conjoined twins, Mercy and Grace Aeiygbenmi, along with their parents and medical team back to Yenagoa after a successful separation surgery at the Federal Medical Centre (FMC), Yola.

In a statement, Director of Public Relations and Information, Nigerian Air Force, Air Commodore Ibikunle Daramola, said the twins and their parents arrived the Bayelsa International Airport in the company of the NAF Chief of Medical Services (CMS), Air Commodore Gideon Bako, onboard a NAF Beechcraft KingAir 350i aircraft.
Daramola said they were received on arrival by the Deputy Governor of Bayelsa State, Mr Lawrence Ewhrudjakpo, as well as other members of the Bayelsa State Executive Council and the Chief Medical Director (CMD) of the Federal Medical Centre (FMC) Yenagoa, Dr Dennis Allagoa, who all expressed their appreciation to the Chief of the Air Staff (CAS), Air Marshal Sadique Abubakar, and the entire NAF family for the humanitarian airlift as well as the support provided throughout the process.
Daramola added that the parents of the twins also expressed gratitude to all those who played various roles in the successful separation of the twins, including the medical teams at the FMCs in Yenagoa and Yola as well as the NAF personnel who participated in the airlift.
He said a press conference was held earlier in Yola, before their departure, to announce the successful separation of the twins.
The CMD of FMC Yola, Professor Awul Abubakar, gave highlights of the key aspects of the process during the elaborate but COVID-19 compliant ceremony, which had the Secretary to the Government of the Federation, Mr Boss Mustapha, as Special Guest of Honour, as well as the representatives of the Adamawa State Governor and the Honourable Minister of Health, amongst many other dignitaries, in attendance.
Professor Awul Abubakar noted that the successful separation of the twins, who were discovered to be joined at the abdomen when they were born on December 1 2019, was as a result of collective efforts of medical professionals as well as support received from various quarters, including the NAF.
He lauded the trust and patience shown by the Aeiygbenmis throughout the process, which, he said, contributed to the success achieved.
In his remarks at the event, the CAS, who was represented by the CMS, emphasized that the NAF would sustain its numerous humanitarian relief operations, including medical outreaches, to alleviate the sufferings of victims of insurgency, banditry and natural disasters, like floods.
He noted that the Service had, through such initiatives, provided free medical services to over 400,000 people across the Country, including Internally Displaced Persons (IDPs) in the North East.
He equally disclosed that the NAF had established Level 2 Hospitals at the Bama and Dalori IPD Camps in Borno State, where it has also been providing feeding for over 1,000 school children as well as “Dignity Packs”, containing a complete package of sanitary items, for young girls.
Speaking further, the CAS noted that the NAF had also recently distributed palliatives to the poor and vulnerable members of its host communities to cushion the effect of the COVID-19 Pandemic, whilst also continuing to support the Federal Government’s COVID-19 response through airlift operations, provision of liquid oxygen, as well as the provision of its medical facilities for use as isolation centres. According to him, “the NAF also conducted missions to distribute life-saving medical supplies and equipment to various parts of the Country, in addition to airlifting West African Health Organization (WAHO)-donated COVID-19 medical supplies to 13 West African countries using NAF C-130H aircraft.
He said besides the delivery of supplies, the NAF also continues to play vital roles in the movement of critically injured individuals and patients requiring urgent medical attention to appropriate destinations”.
The CAS further noted that the airlift of the Aeiygbenmi twins was one of such gratifying humanitarian airlifts. “It is heartwarming to see the girls enjoying life as independent individuals”, he added.