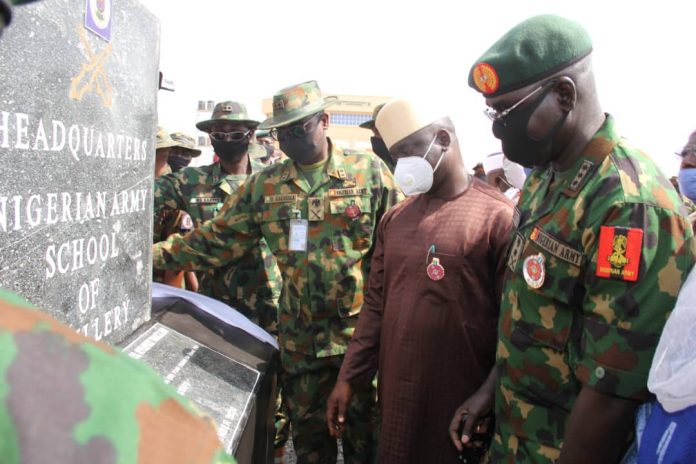 The Chief of Army Staff (COAS), Lt.-Gen. Tukur Yusuf Buratai, on Saturday in Kachia, Kaduna State, inspected and inducted new set of artillery guns and equipment to be deployed for operations in the North East.
Buratai also inaugurated the new Headquarters complex for the Nigerian Army School of Artillery (NASA) and also inspected several ongoing projects in the school and the barracks community.
The News Agency of Nigeria (NAN), reports that the Federal Government through the ministry of defence procured the brand new artillery guns and equipments.
The  guns are field artillery pieces and some of the equipment are vehicle ultra-light carriage for artillery and self propelled light gun series whose identity and specification is not to be published for security reasons.
Speaking to journalists after the commissioning ceremony,  spokesman of the Nigerian Army, Brig- Gen. Sagir Musa, explained why the chief of army staff was in the NASA which is to inspect and test-fire the guns.
He said that one of the COAS main priorities  included, “ensuring a conducive working environment for officers and soldiers of Nigeria Army.
“It was in this vein the COAS commissioned the ulta modern Nigerian Army school of artillery Headquarters here in Kachia today which you just witnessed”, he said.
“Giving the quality of works done, that singular act is commendable and will help in enhancing productivity of officers and soldiers of the Nigerian Army School of Artillery”.
“The new artillery guns inspected by the Chief of Army Staff will be inducted into the Northeast Theater of Operation Lafiya Dole in the North East”, Musa said.
NAN
Please follow and like us:

Ondo guber race: Why Agboola Ajayi was not chosen as my...