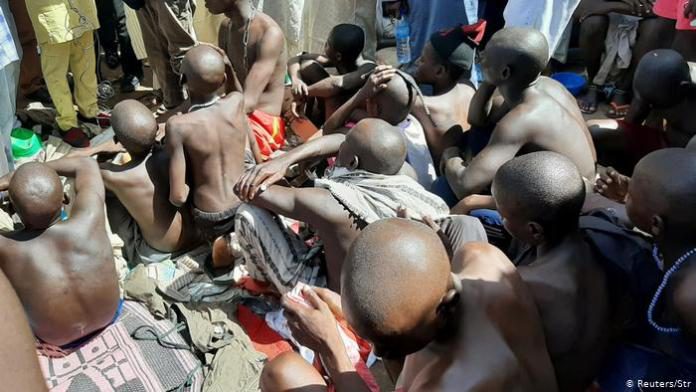 …The young men and boys were found beaten, chained and raped

President Muhammadu Buhari has ordered a crackdown on abuse at Islamic schools, after another police raid led to the rescue of 67 boys and men from an Islamic school in the northern Nigerian state of Katsina.

Over 300 boys were held captive in the building in Daura , the home town of President  Buhari as of Monday, October 14.

Agency reports on Wednesday quoted a police spokesperson to have said the rescued were victims of “inhumane and degrading treatments” in the school, who were being subjected to beatings, abuse and squalid conditions.

The school, run by a 78-year-old cleric, Bello Mai Almajirai,  was also supposed to be a rehabilitation centre.

According to police spokesperson Gambo Isa, authorities discovered the school when a few boys escaped on Sunday evening from the torture they underwent.

The victims are reported to have been “beaten”, “starved” and “sexually assaulted”.

Pressure is growing on President Buhari to take a firm stance against young people being educated in conservative Islamic schools known in the popular Hausa language as “makaranta”.

Muslim parents, in a bid to train their children in Islamic education, tend to enrol them in these schools.

Although most of these parents can have their children educated in both conventional Western-style schools and Islamic institutions of learning, it is common in Nigeria to have children attend solely the latter.

This is the second time in about a fortnight that children have been rescued from such an institution.

At the end of September, an alleged rehabilitation and learning facility in Kaduna, Nigeria, that housed over 300 male students was busted.

Kaduna state police spokesman Yakubu Sabo told AFP the students were kept in “the most debasing and inhuman conditions in the name of teaching them the Koran and reforming them.”

Operating without a licence and no “formal training in behaviour modification” the proprietor, 39-year-old Ismaila Abubakar, had run the school for close to 10 years.

Ismaila, speaking to the police, said his school is an Islamic facility, though the police are yet to ascertain if it was used as a religious facility. The owner and six teachers were apprehended by the police during the raid.

“Mr President has directed the police to disband all such centres and all the inmates be handed over to their parents,” said a presidential spokesman.

“The government cannot allow centres where people, male and female, are maltreated in the name of religion,” he said.

Prior to this week’s raid, hundreds of captives had escaped the centre, police said on Tuesday.

The 67 inmates who were freed by Katsina police were shackled, and many were taken to hospital for treatment, Police Superintendent Isah Gambo told Reuters.

“I tell you they were in very bad condition when we met them,” Gambo said.

A freed captive told Reuters on Monday that the instructors beat, raped and even killed some of the men and boys held at the facility, who ranged from seven to 40 years of age. It was not immediately possible to verify his account.

While the institution told parents it was an Islamic teaching centre that would help straighten out wayward family members, the instructors instead brutally abused them and took away any food or money sent by relatives.

Police said they had arrested the owner of the facility and two teachers, and were tracking other suspects.

The more than 200 captives who escaped were still missing, Gambo said. Police were working to reunite the others with family members.

“The inmates are actually from different parts of the country – Kano, Taraba, Adamawa and Plateau States,” he said.

“Some of them are not even Nigerians. They come from Niger, Chad and even Burkina Faso and other countries.”

Islamic schools, called almajiris, are common in the mostly Muslim north of Nigeria.

Buhari said the government planned to ban the schools eventually, but he has not yet commented on the Katsina school.

What Nigerians want from Executive, Legislature, by Osinbajo

History will be kind to Buhari for eliminating evils of corruption...