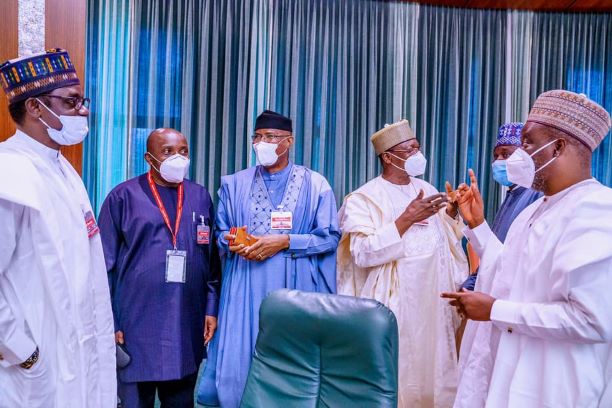 ▪︎says internal democracy will strengthen party
President Muhammadu Buhari, on Monday in Abuja, said enhanced consultation within the governing political party, All Progressives Congress, would strengthen its internal democracy and improve chances of winning elections.
In a statement, Special Adviser to the President on Media and Publicity, Femi Adesina, said the President, who inaugurated a Tripartite Consultative Committee of the Executive, Legislature and Leadership of the APC at the State House, said amicable resolution of conflicts in the party through regular consultations would create more understanding.
“Let me welcome all of you to this first Consultative Committee of the APC, our members of the National Assembly and the Executive.
“Our party commands a clear majority in the Senate and the House of Representatives.
“The Vice-President, the distinguished Senate President, the Right Honourable Speaker and I all belong to APC and the working relationships between the Executive and the Legislative have been excellent so far.
“Our joint responsibility is to keep things that way and see where we can improve our communication and coordination.
“But we must admit to ourselves that our party has been too often embroiled in bitter and on occasions, totally unnecessary squabbles costing us seats in legislative and gubernatorial elections.
“These never should have happened. We are here to make sure such occurrences do not happen again.
“We must now ensure regular consultations between the party and the Governments.’’
The President urged members of the committee to further align objectives of the party and be alive to electoral promises, reminding party members of the need to always move the country forward.
“I am a firm believer in the doctrine of the Separation of Powers, which is fundamental to our constitutional democracy. But our practice should be harmonious checks and balances devoid of bitterness and petty rivalry,’’
President Buhari said he had great faith in the Consultative Committee to help improve governance and achievements of the party, assuring them of his support.
Members of the consultative committee are: Vice President Yemi Osinbajo, SAN, Chairman; Senate President, Ahmed Ibrahim Lawal; Speaker of the House of Representatives, Femi Gbajabiamila; Deputy Senate President, Ovie Omo-Agege; Deputy Speaker, Ahmed Idris Wase; Governor of Yobe State/Chairman, APC Caretaker Committee, Mai Mala Buni; Senate Majority Leader, Sen. Yahaya Abdullahi and House Majority Leader, Alhassan Ado Doguwa.
Others include: Attorney General/Minister of Justice, Abubakar Malami, SAN; Secretary to the Government of the Federation, Boss Gida Mustapha; Chief of Staff to the President, Prof. Ibrahim A. Gambari and Secretary, APC Caretaker Committee, Sen. Akpan Udoedehe.
Please follow and like us:

Buruji Kasamu: I have lost a friend, brother and mentor-Hon. Adesegun...