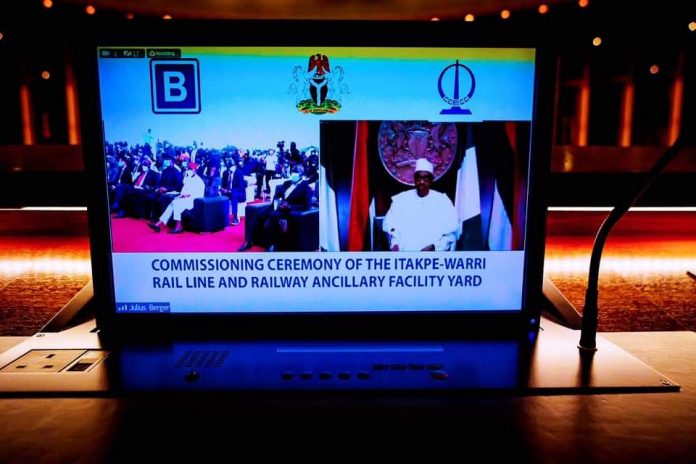 According to a statement by Special Adviser to the President on Media on Publicity, Femi Adesina, President Buhari at the virtual opening of the rail line linking Itakpe to Warri, directed the Federal Ministry of Transportation to link all the nation’s ports of origin and destination – Apapa, Tin Can, Warri, Onne, Calabar Ports- to the rail network in order to significantly improve overall transportation and economic capacities.

Adesina said the President declared that his administration recognised the importance of the railway mode of transportation as a vital backbone to support industrialization and economic development.

“Accordingly, I have approved the prioritization of viable railway routes for either new rail lines or the reconstruction and rehabilitation of some, to achieve effective and efficient train services supporting the country’s trade and commerce.

”The Railway Infrastructure that I have the honour to commission today is the rail line from Itakpe via the steel town complex of Ajaokuta to Warri, and is an important link for the country’s economy as the central rail line.

”This Government has also approved to link this line further from Itakpe to Abuja, thereby, connecting the Northern Zone of the country and also extending southwards to link the Warri Ports,” he said.

He further stated that the President expressed confidence that the project, which serves as a vital link of South-South geopolitical zones of the country to the Northern zones, would be completed during the tenure of this administration.

”It will link people across the cultural divides and expand the frontier of trade and commerce, which will lead to better standards of living for our citizens,” he said.

President Buhari recalled that to further give recognition to Nigerian sons and daughters who have distinguished themselves at nation building and development , 11 railway stations and railway villages were named after some deserving citizens.

The President enjoined all Nigerians in the transportation industry, especially the railway sub-sector, to continue to support Government in its stride to achieve other railway infrastructure projects.

He also enlisted the support of all at realizing this milestone of a functional and full-fledged central railway, after more than 30 years during which the project has suffered several setbacks and false starts.

”I implore those who work on this line to uphold maintenance and safety culture necessary for long-lasting service in this difficult terrain.

”By the same token, I urge other sectors who will be primary beneficiaries of this transportation backbone, including, the iron and steel sector, stakeholders in agricultural and mining sectors on this corridor, as well as the host communities to protect and sustain this infrastructure and maximize the benefits that could be derived from it and which is readily available at their doorsteps.

”This project will increase the volume of their trade and kickstart and resuscitate the iron and steel complexes.

”All these, I hope will improve our industrial potentials and capacities as well as boost employment,’’ he said.

President Buhari said projections indicated that the commencement of operation of the Itakpe-Ajaokuta-Warri Rail line would account for close to one million passengers annually and also unleash approximately 3.5 million tonnes capacity of freight annually that will service all off-takers on the corridor and beyond.

Congratulating the Minister of Transportation Hon. Rotimi Chibuike Amaechi and his team on successfully completing the project, the President recognized the host communities on this corridor for their patience during the long wait of over 30 years for the realization of the project.

He also commended the host communities for their cooperation during the completion works by the Federal Government.

He assured Nigerians that his administration would continue, within available resources, to judiciously connect commercial and industrial hubs to boost trade, generate wealth and create employment.

In his remarks, Delta State Governor, Dr Ifeanyi Okowa commended President Buhari’s bi-partisan approach to governance, saying ‘‘it is a thing of pride and joy that this rail line was completed under your watch.’’

”Deltans are excited that this day has come,’’ he said, adding that the Ika nation is glad of the recognition accorded former President Goodluck Jonathan, in naming the railway complex in Agbor after him.
Okowa urged the private sector to take advantage of the historic corridor by establishing investments that will create jobs for locals, curb youth restiveness and stem the tide of criminality.

”It is imperative that the Federal Government in collaboration with the States provide adequate security cover for this rail line corridor,” he said.

In his remarks, Edo State Governor, Godwin Obaseki congratulated the President on the feat of completing the project, saying it is quite fortuitous that few days to the country’s 60th independence celebration, the President has achieved the completion of this critical infrastructure.

”For us in Edo State we are excited that we have a few stops that have been completed and we are going to be working with you to utilise this infrastructure,” he said.

The Edo Governor appealed to the minister of transportation to extend the rail line to the industrial park in Benin City to facilitate the movement of goods to the northern part of the country.

In his remarks, Minister Amaechi said the project was fully funded by the Nigerian government, adding that 8 of the 10 stations are in the Niger-Delta/ South South region of the country.

”There is no loan on this project, it was funded from the budget and I had the directive of the President to go and revive it and complete it as soon as possible,’’ he said.

According to the Transportation Minister, the project started under the military era in 1987 but ‘‘underwent protracted hiccups, prolonged abandonment and massive vandalisation,’’ before it was resuscitated by the Buhari administration.

For Muslims and Christians: The Scales Are Falling Off Our Eyes!...

Osaro Onaiwu and his Hyperbole, By Michael Ovienmhada