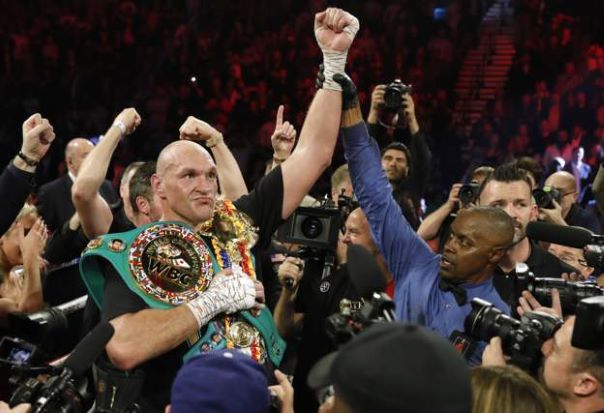 Furious Tyson Fury battered Deontay Wilder over six-and-a-half brutal rounds, dropping him twice, and pounding on him until Wilder’s corner stopped the fight early in the seventh.

With the win, Fury became the World Boxing Council heavyweight champion, and made an emphatic statement in his case to be considered the world’s best heavyweight. The knockout loss was Wilder’s first defeat in 44 fights, while Fury improved his record to 30-0-1.

The two men first fought in December 2018, when a measured and tactical Fury built a big lead on the judges’ scorecards before Wilder scored two late knockdowns. That bout ended in a split draw, and set up Saturday’s big-money, high-stakes rematch.

Fury dominated, imposing his size — he weighed 273 pounds, compared with 231 pounds for Wilder. He controlled distance with a stiff jab, and used it to set up hard right hands and thudding body shots. In clinches, Fury leaned on the lighter Wilder, or wrenched his neck until the referee, Kenny Bayless, could separate them. At one point, Fury even wagged his tongue near Wilder’s bloody neck.

By Round 6, Wilder appeared exhausted, and in the seventh Fury trapped him in a corner and pummeled him until Wilder’s corner threw in the towel.

Afterward Fury, who held four heavyweight titles before retiring in 2016, signaled his intention to rule the heavyweight division.

“The king has returned,” he said during an interview in the ring before grabbing the microphone to lead the crowd in singing Don McLean’s “American Pie.” – The New York Times

FG inaugurates board of AFN

The Police rely on intelligence… to function effectively. For the public...