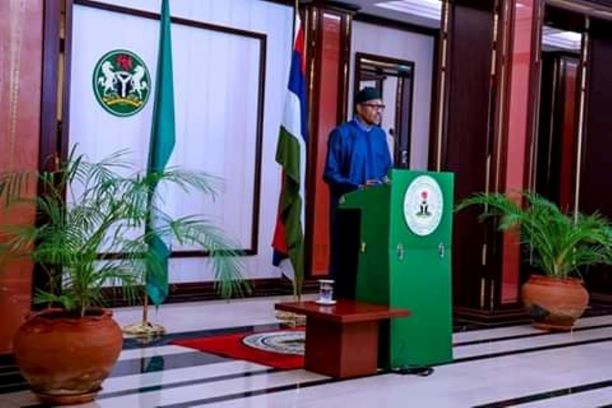 President Muhammadu Buhari has extended the current restriction of movement in Lagos and Ogun States as well as the FCT for another fourteen days.

Buhari stated this in his address to Nigerians on Monday. He said the decision was necessitated after receiving briefings and Report from the Presidential Task Force

“With this in mind and having carefully considered the briefings and Report from the Presidential Task Force and the various options offered, it has become necessary to extend the current restriction of movement in Lagos and Ogun States as well as the FCT for another fourteen days effective from 11:59 pm on Monday, 13th of April, 2020.I am therefore once again asking you all to work with Government in this fight,” the President said.

He added that it is a matter of life and death. “Mosques in Makkah and Madina have been closed. The Pope celebrated Mass on an empty St. Peter’s Square. The famous Notre Dame cathedral in Paris held Easter Mass with less than 10 people. India, Italy and France are in complete lockdown. Other countries are in the process of following suit. We can not be lax,” Buhari said.

The President further stated that the previously issued guidelines on exempted services shall remain.

“This is a difficult decision to take, but I am convinced that this is the right decision. The evidence is clear.

“The repercussions of any premature end to the lockdown action is unimaginable.

“We must not lose the gains achieved thus far. We must not allow a rapid increase in community transmission. We must endure a little longer,” he said.

FG to Nigerians: brace up for tough times

Nigerian Army refuses to reinstate officer who killed over 200 Boko...