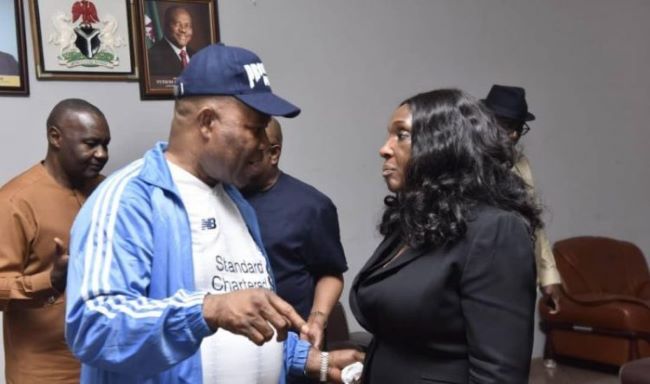 Armed security men have stormed the residence of the suspended Managing Director of the Niger Delta Development Commission, NDDC, Dr Joi Nunieh, in Port Harcourt, with a view to preventing her from leaving the house.

Dr Nunieh is billed to testify this morning (Thursday) before the House of Representatives committee investigating alleged mismanagement of N81 billion at the NDDC.

The security men were said to have stormed her residence since 4.00am.

Dr Nunieh was managing director of the Interim Management Committee set up by President Muhammadu Buhari to conduct forensic audit at the NDDC.

This is coming on the heels of Nunieh’s allegations leveled against the Minister of Niger Delta Affairs, Senator Godswill Akpabio.

Mr Akpabio has, however, has denied the plethora of allegations centering on abuse of office, monumental corruption, and sexual harassment.

Laila Johnson-Salami of @ARISEtv tweeted that “armed security men have been at Joi Nunieh’s premises. She is on the phone to anchors – tune in. This is a ridiculous attempt to intimidate her.”

Another twitter user @lekanpaul also tweeted, “Former NDDC IMC MD, Joi Nunieh blocked since 4:00 am by 30 armed policemen in Port Harcourt from leaving her house for the Airport. She is due to testify at the House of Reps today in Abuja over the IMC’s alleged looting of N81 Billion.”

The Fascist Liberal/Left and those that hate Donald Trump (Part 3),...