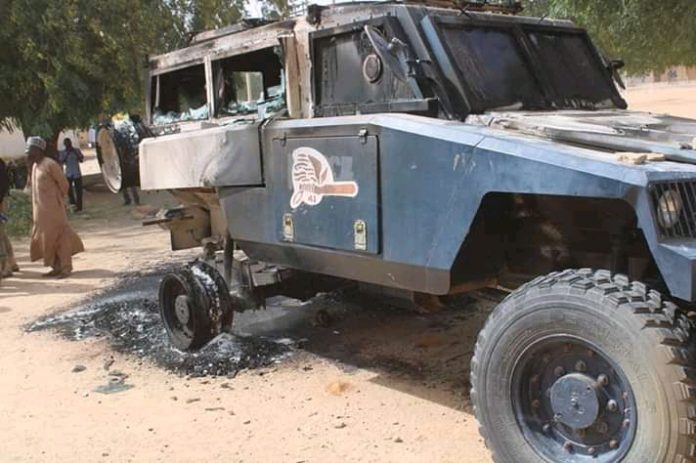 By Bode Olushegun
Residents of Dapchi in Yobe State said eight mobile policemen were killed in the Wednesday night attack on the town.
The residents disclosed this while narrating their experiences to the Executive Secretary of Yobe State Emergency Management Agency (YOSEMA), Mohammed Goje, who visited the town to console the people on the incident, said the mobile policemen were engaged by the insurgents.
The residents said the attack was targeted at security formations as the insurgents went directly after them.

They said terrorists attacked the Divisional Police Headquarters and the Nigerian Army formation in the town, while one police armoured vehicle was set ablaze.

They equally told journalists that the insurgents came to Dapchi, about 100 kilometres from Damaturu, the Yobe State capital, through neighbouring Jumbam village.
The residents however called on the Federal Government to take up proactive measures in curtailing the incessant attacks on their community.

The Acting Assistant Director of Army Public Relations of Sector 2, Operation Lafiya Dole, Lieutenant Chinonso Oteh, as well as the Police Public Relations Officer in Yobe, Dungus Abdulkarim, have both confirmed the attack though they could not give the number of casualties.
The Executive Secretary of the Yobe State Emergency Management Agency (SEMA) Mohammed Goje, who visited the scene of the attack sympathised with the people of the town.
Dapchi is once again in the news for the wrong reason following the abduction of over 100 students over two years ago from the town.
The students were freed few days later by the insurgents who kept the single Christian girl, Leah Sharibu hostage up till date.
Please follow and like us:

We will remain bullish in our approach to developing Oyo –...