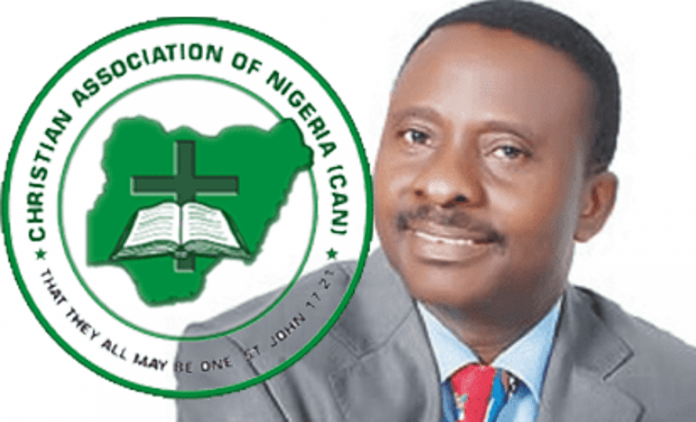 The Christian Association of Nigeria, CAN, has called on all churches in the country to embark on peaceful protests to demand for justice to be done I the matter of the killing of Deborah Samuel by a mob of Muslim students in Sokoto fir alleged blasphemy of Prophet Muhammed.

The call was contained in a letter dated May 14, 2022 and signed by the General Secretary of CAN, Joseph Bade Daramola, Esq

Entitled: “A REQUEST FOR NATIONWIDE PEACEFUL PROTEST CALLING FOR JUSTICE FOR DEBORAH YAKUBU”, the letter reads: “I have been directed by the CAN President, His Eminence, Rev. Dr Samson Olasupo A. Ayokunle, to request all Church Leaders, through your various Churches to organize a PEACEFUL PROTEST in honour of one of our daughters, DEBORAH YAKUBU, who was gruesomely murdered on Thursday, 12 May, 2022 at the Shehu Shagari College of Education, Sokoto in Sokoto State by some Islamic extremists.

“The protest will take place on 22 May, 2022 in the afternoon by 3:00 pm in every Secretariat of the Christian Association of Nigeria (CAN) nationwide and not on the streets in order to avoid further loss of lives. Those without CAN’s secretariat may use any church with big premises.

“We are to hold placard with some succinct messages like “WE DEMAND JUSTICE 4 DEBORAH,” “NO MORE KILLING IN GOD’S NAME”, “ENOUGH IS ENOUGH” “POLICE, STOP UNPROVOKE KILLINGS IN NIGERIA,” “CHRISTIANS ARE NOT SECOND CLASS CITIZENS.” “KILLERS OF DEBORAH MUST BE PROSECUTED,” “WE CONDEMN RIELIGIOUS KILLNGS,” “WE SAY NO TO ISLAMIC EXTREMISTS.”

“We also call on Nigerian Christians in the Diaspora to join us using our embassies all over the world.

“The occasion can also be used to pray for Deborah’s family and friends, peace for the country, victory for the church and godly political leaders in the coming general election.

“Thanks, and God bless You.” 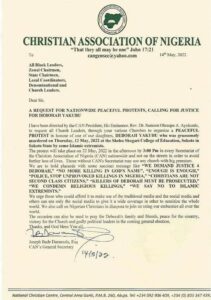 Tinubu meets minds with Buhari, says he has thrown his hat...

I did not sell land where collapsed building was built to...

What #EndSARS mayhem tells us, By Simon Kolawole

Child marriage is an African method of legalizing rape of girls-...