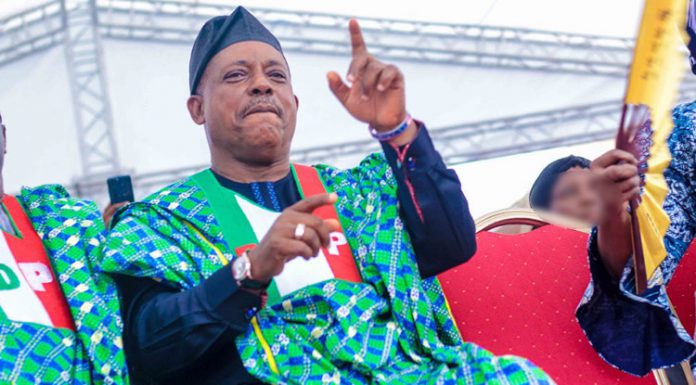 Uche Secondus..vows no retreat, no surrender

The National Chairman of the Peoples Democratic Party (PDP), Prince Uche Secondus, has called on the Independent National Electoral Commission, INEC, to act quickly on the Abuja High Court ruling, disqualifying the deputy Governorship candidate of the All Progressives Congress (APC) for Bayelsa state, Bishop Degi, by invoking the relevant sections of the constitution and the Electoral Act.

Prince Secondus said that a gubernatorial candidate without a running mate could not stand on one leg and walking into election and should therefore be disqualified immediately.

Secondus, in a statement by his media office, further said that what the court ruling meant was that the APC had no validly nominated candidate for the November 16, Governorship election.

According to him; “The requirement of the law on this is clear. I therefore urged INEC to do the needful by disqualifying APC candidate in the race as he cannot stand alone nor replace his deputy at this time.

Secondus said that what is happening with APC in Bayelsa obtains when desperadoes chase power without any clear vision and love to serve the people.

The PDP National Chairman also took a swipe at the attitude of the Nigerian military in Kogi and Bayelsa states ahead of the November 16, elections, stressing that the image of the country before the global democracies is being damaged.

He advised the military to stay away and not do anything that will further endanger the reputation of the nation’s military.

In his words; “You are supposed to be apolitical and neutral since you were established to protect the country and its citizens all the time and not the government in power at a particular time.

APC works on PDP’s nerves, says Jonathan working for us