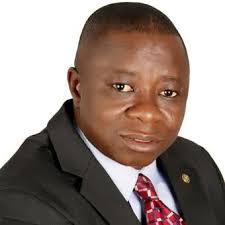 I read with utmost disgust the ludicrous mumbo jumbo, a lame fabrication and a display of insane politics taken too far by  faceless miscreants in it’s futile attempt at tarnishing the sterling and peaceful personality of Rt Hon Samson Osagie, former minority whip, Federal House of Representatives. This is indeed the handiworks of desperate individuals who are obviously threatened by the pace at which the distinguished legislative icon is going about with his constructive and sublime political engagement.
However, Even when Rt Hon Samson Osagie waved it off as the tomfoolery of political toddlers owing to the unknown identity of the writer, I feel compelled to respond to these plain falsehood owing to the gullibility of a miscroscopic few in our society, It’s baselessness notwithstanding.
Now the first question that arose in my mind is who is Mr Hope? What is his last name and who was he? Where is he from?
Its obvious that this fictional Mr Hope only exist in the primitive and senseless imagination of the faceless writer. It’s saddening however, to see the loathsome comparison with that of Uwaila Omozuwa whose murder still grieves our hearts and that of her immediate family. I feel this is unfair and condemnable. This is recklessness taken too far and even as we are almost certain of the outcome, efforts will be deployed to verify the existence of the said Independent Network for social and economic justice (INSEJ).
It’s pertinent to add at these point that Hon Samson Osagie has been/is still a Man of peace who belong to the cosmopolitan political class with civility as his stock in trade. With high moral upbringing, his political engagement has always been rancour free. With his numerous media presence, he has never been caught using words that invites violence. His political participation has always been issue based. He is an advocate for good sportsmanship in politics and can never condescend so low to engage in any acts of violence. Hon Samson Osagie does not know any Mr. Hope who has been murdered, nor aware that any such incident took place anywhere.
This fiction is a desperate attempt to generate negative perception of the unsuspecting members of the public towards his person and character. Nothing contained in the said libelous publication can be further from the truth.
This is pure propaganda hence the facelessness of the writer. Had the reverse been the case, he would have been slammed with a defamation of character lawsuit. The general public are advised to dismiss this smear Campaign attempt as the quivers of drowning men grabbing at straws.
Signed
Prince Thomas Ukato.
Media Assistant to the D.G, Edo South APC Campaign council.
(I endorse this rejoinder.
Hon Samson Osagie)
Please follow and like us:

Anyim exposes Umahi, says “Your accusations against me wild, infantile,...