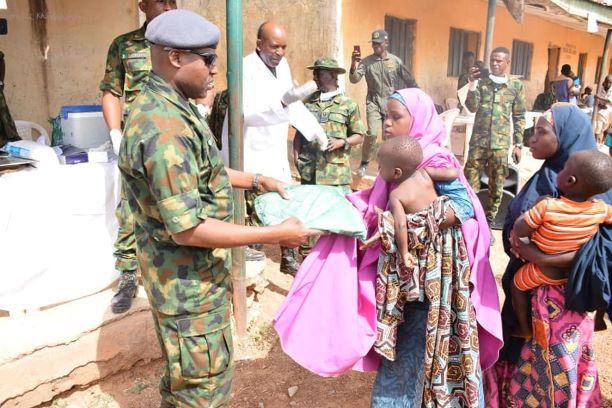 According to the Nigerian Air Force Director of Public Relations and Information, Air Commodore Ibikunle Daramola, the outreach was being conducted in furtherance of the NAF’s efforts to ameliorate the plight of inhabitants of the 3 communities by meeting their healthcare needs.

Daramola said the Medical Team from the 461 NAF Hospital Kaduna, was led by its Commander, Group Captain Ahmed Saidu.

He said that while on a visit to one of the Community Heads before the commencement of the exercise, that the outreach was being conducted at the instance of the Chief of the Air Staff (CAS), Air Marshal Sadique Abubakar, as part of the NAF’s Civil-Military relations efforts aimed at wining the hearts and minds of the people in the affected communities.

He added that the Commander said apart from the medical services that would be provided at the venue, critical cases would be referred to the NAF Hospital in Kaduna for further treatment.

The Community Head of Kerawa, Alhaji Ibrahim Adamu, expressed appreciation to the NAF for coming to the aid of his community by promptly responding on the day of the attack through air strikes which had saved the community from further mayhem.

He also thanked the CAS for the medical support which, he said, would go a long way in addressing the healthcare challenges of the affected communities.

Beneficiaries, who trooped out in their numbers to benefit from the exercise, expressed their joy to the NAF, stating that the gesture was a display of love by a Service that has the interest of the public at heart.

Medical services being provided include general medical, optical and dental check-ups as well as provision of prescription eyeglasses and conduct of health talks.

Others are deworming and immunization of children and distribution of insecticide-treated mosquito nets to pregnant women and nursing mothers.