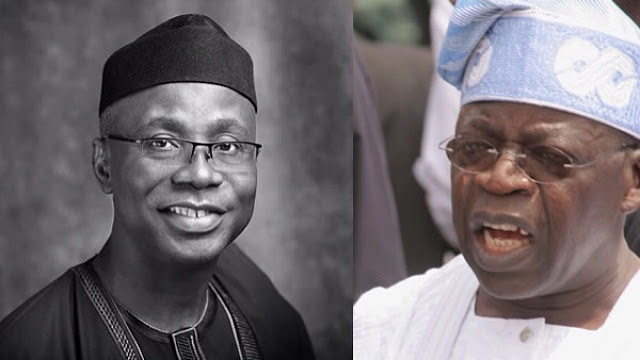 Pastor Tunde Bakare’s trending video on Bola Ahmed Tinubu, for which he is receiving caustic flak from the Nigerian online commentariat, isn’t the deodorization of Tinubu’s smelly underbelly that many people say it is. It is, on the contrary, an effective denunciation of Tinubu and a deep, lasting, strategic delegitimization of his “omo Eko” bona fides.

In the video, Bakare essentially mainstreamed reputationally deleterious information about Tinubu that had flourished on the fringes of Yoruba society, that people avoided to talk about openly in polite company, and that most people outside Yorubaland didn’t have the faintest familiarity with.

That information is that everything about Tinubu— from his very name to his claims of being from Lagos State, from his source of income to his parentage and many things in-between— is an elaborately fraudulent scheme.

Let me narrate an anecdote to illustrate what I mean. In the over two years that my column has appeared on the back page of the Saturday Tribune, I have cultivated a vast, engaged readership in the Southwest who reach out to me to share ideas with— and confide in— me.

One of the persistent requests I’ve received from readers of my column in the Southwest has been the invitation to delve into Tinubu’s well-layered, labyrinthine network of duplicity about his origins and identity.

I told a particularly persistent interlocutor who wanted me to publicize what he thought was a scoop on Tinubu that I was already familiar with the information he had shared with me because I’d read most of it in Yinka Odumakin’s March 19, 2019 column titled “Dear Chief Tinubu.” Although the article went viral last year, the Iragbiji man said he hadn’t read it.

There were clearly several angles to explore about Tinubu’s vast and varied deception following Odumakin’s column, but I didn’t hop on it because, being a media law teacher, I knew it was a slippery legal slope. Although people of Iragbiji said Tinubu was born and raised in their town and has no connection with either Lagos or the Tinubu family, I can’t prove this in a court.

Similarly, although many people who knew Tinubu when he grew up in Iragbiji said he was known as Amoda Lamidi Sangodele, I can’t prove this in court. (Amoda is the Yoruba Muslim domestication of Ahmad and Lamidi is the Yoruba Muslim domestication of Abdulhamid.) And even though the current governor of Osun State, Gboyega Oyetola, is the son of Tinubu’s older sister—which calls into question Tinubu’s claims to being 69 years old since Oyetola is 67 years old—I have no DNA evidence to prove anything.

Of course, Tinubu can’t sue anyone who brings up his forfeiture of hundreds of thousands of dollars to the US government in the early 1990s in the aftermath of circumstantial evidence that he amassed tremendous wealth from trafficking in drugs. The court document of the forfeiture is in the public domain in the U.S. and was published by Sahara Reporters on September 15, 2008.

Nor can he sue anyone for saying that all the schools he claimed to have attended in his INEC form in 1999—from primary school to university—are false because the late Gani Fawehinmi proved that in court and risked the social ostracism of the hegemonic political elites of the Southwest who now hypocritically valorize him posthumously.

Tunde Bakare has helped to not only centralize these and other odious aspects of Tinubu’s personality; he has also (unwittingly) granted public commentators the latitude to discuss them without fear of legal consequences. In media law, opinion writers have legal cover to comment on otherwise libelous subject matters if the subject matters are in the news and are of public interest. It’s called the fair comment privilege.

In Bakare’s political homily, he basically affirmed all the hitherto fringy whispers about Tinubu: that he is from Iragbiji in Osun State; that his current name is not his original name; that he has disowned his biological parents and “adopted” the Tinubu family of Lagos with whom he has zero consanguineal affiliation; that the late legendary Alhaja Abibat Mogaji of Lagos is not Tinubu’s biological mother; that he has an odious “past”; that he is corruptly “making money from taxation” by “exploiting the system to his advantage”; and that he is “transparently corrupt.”

These are not the sorts of issues Tinubu wants Nigerians to be discussing about him as he stealthily campaigns to be Nigeria’s next president and works to fend off ferocious, multifarious challenges to his grip on Lagos and Southwest politics.

He would much rather that people think of him as a Lagosian who is a scion of the famous Tinubu family, who has always been known as Bola Ahmed, and whose biological mother was the late Alhaja Abibat Mogaji.

Even though Bakare appears to be wracked by a dissociative identity disorder (which probably explains why he evinces and embodies mutually contradictory positions), megalomania (recall his boast that he would succeed Buhari because he is “number 16” while Buhari is “number 15”), delusion (anyone who claims God communicates with him is delusional), and compulsive mendacity, he is also a skilled rhetorician who is artfully defanging Tinubu, his political opponent, using a clever rhetorical tactic.

Bakare intentionally disclosed and popularized unflattering facts about Tinubu’s life putatively to undermine them but, in reality, to mainstream them so they can be invoked to delegitimize him.

Notice that Bakare was stronger in channeling anonymous people’s claims that Tinubu is a fraud than in defending Tinubu’s fraud. For instance, his only defense against Tinubu’s fraudulent Lagos identity claim is that the truth of the claim won’t “put food on the table of the hungry or create jobs for the unemployed or the unemployable.”

That’s a weak strawman argument. No one said it would. The self-evident implication of that fraud, of course, is that if Tinubu isn’t straight with something as basic as his origins— and even his name and ancestral pedigree— why should he be trusted with something as grave as the presidency of a country of 200 million people? Anyone who can disown his parents, his name, his hometown, etc. for power and influence can sell anyone.

Bakare’s defense for Tinubu’s false claim to being the late Abibat Mogaji’s biological son (Bakare insisted on calling him her “adopted son”) was simply to state that no one is a “self-made” man and that given what the woman did for Tinubu, it was “not only proper, it is also honorable” for Tinubu to call her his mother. “Asiwaju Ahmed Bola Tinubu did not and could not choose his biological parents, yet no one can forbid him from choosing his role models or stop him from changing his name,” he added for emphasis.

Then Bakare brought Tinubu’s legendary corruption to the center of his congregants’—and, by implication, Nigerians’– consciousness but feebly “defended” him by quoting him as saying he learned how to be “transparently corrupt” from Olusegun Obasanjo. How is that a defense, especially given that Tinubu and Obasanjo are not political associates, and Obasanjo, being a retired two-term president, isn’t hurt by any association with corruption?

In sum, every indication points to the conclusion that Bakare wanted to put Tinubu’s sordid deception about his origins—which people talked about in hushed tones in Yorubaland and about which most people outside Yorubaland are ignorant— in the forefront of the prevailing current of thought about him in Nigeria. The best way to do that without backlash was to appear to be censorious of the narrative while giving it publicity and currency.

Mark to government: Let’s change narrative to inspire citizens in 2021

The Adeboyes release order of service for Pastor Dare’s burial

PDP Campaign Flag Off in Akure: Of misrepresenting the truth; A...