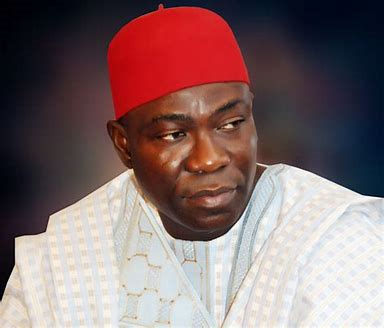 Toby Okechukwu, deputy minority leader, House of Representatives, has described the  attack on a former Deputy Senate President, Sen. Ike Ekweremadu, as a exhibition of ingratitude.

Okechukwu, in a statement issued on Sunday in Abuja, said that the attack allegedly carried out by members of the Indigenous Peoples of Biafra (IPOB) was nothing but a show of shame, News Agency of Nigeria reports.

Ekweremadu had, on Saturday, attended the Second Igbo Cultural Festival of Iri Ji in Nuremberg, Germany, as a distinguished guest of honour on the invitation of the Igbo community.

However, Ekweremadu was violently attacked by some men believed to be members of the proscribed IPOB group after which he was whisked away in a vehicle as seen in a video clip which had since gone viral.

The senator Ekweremadu who had released a statement confirming the attack, said that he was fine and that he had received thousands of calls and messages from Nigerians identifying with him.

Okechukwu, who accompanied Ekweremadu to the event, said that he was particularly saddened that such magnitude of indiscretion was meted out on the former deputy senate president.

The lawmaker described Ekweremadu as a humble but rugged fighter who had practically stuck out his neck in defence of Ndigbo, stressing that he was instrumental to securing the release of the IPOB leader, Nnamdi Kanu.

“The claim by IPOB that they attacked Ekweremadu for instigating the Operation Python Dance flies in the face of logic.

“The senator was one of the vocal voices against military siege to the South-East as well as the extrajudicial crackdown on unarmed IPOB protesters.

“This is a man whose official guest house was raided by security agents in 2017 in purported search for phantom IPOB arms and ammunitions.

“IPOB’s conduct is a ingratitude of the highest degree, especially given the roles which Ekweremadu played in securing the release of Nnamdi Kanu and which IPOB itself acknowledged then,” he stated.

Okechukwu, who represents Aninri/Awgu/Oji River Federal Constituency in Enugu, explained that Ekweremadu was not only in Germany to attend the cultural festival.

He said that the senator was also there to engage the Ndigbo on developments back home and also network for foreign investments in the South-East to boost the region’s economy and create employment for the youth.

“Ahead of that event, Ekweremadu had already held fruitful private meetings with 10 prospective investors arranged by some illustrious Igbo sons and daughters in Europe, particularly Germany.

“The investors have expressed their readiness to invest in Nigeria, particularly in the South-East.

“Again, one would have expected that the exposure of the misguided fellows in IPOB to Europe would have had positive effect on their modes of civic engagement and responsibility, but the reverse was apparently the case.

“Their inability to maximise the opportunity of Ekweremadu’s presence to engage them meaningfully and get properly attuned to developments back home signifies the absence of reason and depth.

“It exposes the entire agitation as full of sound and fury, signifying nothing,” he said.

According to Okechukwu, untutored and disgraceful approach is manifestly ‘un-Igbo’ and really leaves a huge question mark about the collective wisdom and disposition of IPOB leaders.