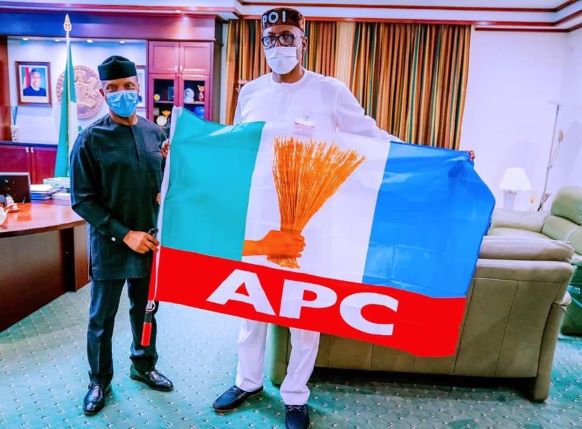 The Chairman of the APC Interim Management Committee and Governor of Yobe state, Mallam Mai Bala Buni, on Saturday announced that the party would retake Edo state in the September 19, 2020 Edo governorship election.

Addressing party leaders and supporters at the University of Benin Sports Centre, venue if the flag off of the party’s campaign in the state, he said the rally was simply to announce that the APC would retake the state but it would be without violence.

Buni presented the party flag to the candidate, Pastor Ize-Iyamu and said that the President and National Leader of the party, Muhammad Buhari, had, on on Friday, formally endorsed the candidate by presenting him with the same flag.

Earlier, the Chairman of the APC national campaign council and Governor of Kano state, Dr Abdullahi Ganduje congratulated the state campaign council of the party on its unit-to-unit, hamlet-to-hamlet and village-to-village campaigns.

He congratulated the people of the state on the inauguration of the Edo state Assembly with the 17 majority members electing a Speaker, 13-months after they were supposed to have been inaugurated by the outgoing governor.

“I congratulate you on the election of new officers of Edo State Assembly. We were astonished and surprised that for 13 months, 14 members-elect were not sworn in and three joined the 17and are now more than three quarters of the Assembly.”

The Edo APC governorship candidate, Pastor Ize-Iyamu, who appreciated the Governors of Kaduna, Jigawa, Ogun, Ondo, Kebbi, Niger as well as Lagos and Kogi, who were represented by their deputies, members of the National Assembly and Ministers for their support said APC would win the September election in all of the 18 LGAs in the state.

He said “In this election, we will not only win but win the 18 LGAs. Never again will we have a governor that is an ingrate, or a governor who will not develop our state or empower our youths.”

He sang to the admiration of the mammoth crowd of party supporters from across the state, who defied the scorching sun to welcome him, the APC chieftains and especially former Governor of the state and immediate past National chairman of the APC, Comrade Adams Oshiomhole.