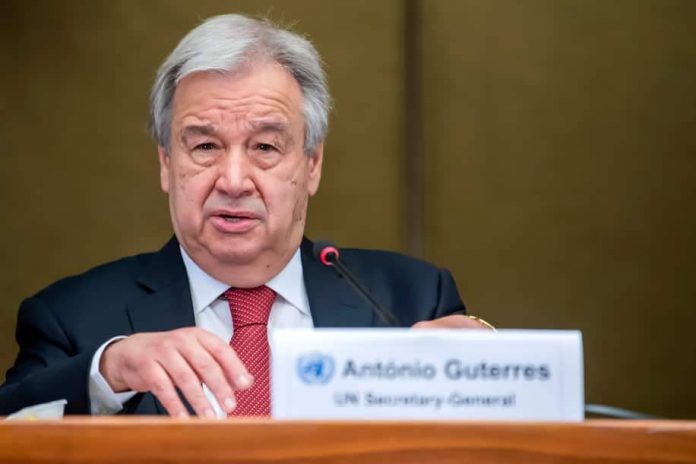 United Nations’ Secretary-General Antonio Guterres laid out his vision for a second term as U.N. chief on Friday, calling for a “surge in diplomacy for peace,” urging the world’s nations to avoid a new type of Cold War, and stressing that in the 21st century everything from the climate crisis to nuclear proliferation and the pushback on human rights is inter-linked.

Guterres is the only candidate in the race so far, and he won support during a three-hour question-and-answer session in the 193-member General Assembly from two major groups — the 120-member Nonaligned Movement of mainly developing nations and the 27-member European Union — as well as smaller groups and individual countries.

In his opening presentation, Guterres painted a grim picture of a world where “more and more people live within their own echo chambers … (and) are lured by misinformation, populism, extremism, xenophobia and racism.”

He called it “a kind of post-enlightenment era that has nurtured irrational, even nihilistic belief systems, spreading fear, denying science and truth.”

And he reiterated his warning about “the new geostrategic divide and dysfunctional power relations, making international cooperation infinitely more difficult at a time when we need it most.”

Guterres stressed his strong belief in nations working together to solve the world’s crises and conflicts but said multilateralism “depends a lot on the establishment of trust among member states, and on making functional relationship among the biggest powers.”

“If there is no trust among member states and if the relationship among the biggest powers remains dysfunctional, then there’s not much the multilateral system can do,” he said. “If those two things are properly addressed, then I think there is a chance for multilateralism to be more effective.”

While the General Assembly elects the secretary-general, it is on the recommendation of the 15-member Security Council where the five permanent members — the U.S., Russia, China, Britain and France — have veto power. So their support is crucial.

Before Guterres was elected, the assembly adopted a resolution in 2015 that made the previously largely secretive selection of the secretary-general more open and transparent.

It allowed the world body’s member states for the first time to see basic information about all candidates, including their resumes, and to meet and question them at open sessions.

Traditionally, candidates have been nominated by a U.N. member state, but that is not a requirement in the U.N. Charter or the resolution.

Guterres, whose current 5-year term ends on Dec. 31, was nominated by Portugal, his home country.

But this year has also seen seven individuals submit applications to be secretary-general without backing from any government including most recently former Ecuadorean president Rosalia Arteaga.

General Assembly President Volkan Bozkir told a news conference on Tuesday “the rule” is that an applicant can only become a candidate when a letter signed jointly by the presidents of the assembly and the Security Council is sent to all member states.

“It looks like the Security Council has the opinion that, traditionally, only applicants supported by a country can become a candidate,” he said, so the only joint letter has been sent on behalf of Guterres.

An email request to China, the current council president, seeking comment was not answered.

Arteaga, whose candidacy has been pushed by the global political movement Forward, indicated earlier this week that she would have support from the government of Ecuador.

But Ecuador’s U.N. Ambassador Cristian Espinosa Cañizares told the assembly on Friday: “We have been informed that this support of the government of Ecuador expressed at the outset of the year (for Guterres seeking a second term) has been renewed by the new government that will take office in the coming weeks.”

During Friday’s question-and-answer session, Algeria’s U.N. Ambassador Sofiane Mimouni, spoke first on behalf of the Nonaligned Movement, telling Guterres it “welcomes your readiness to serve a second term” and “commends … your leadership during the COVID” pandemic. European Union Ambassador Olof Skoog said “the EU and its member states have welcomed your readiness to serve for a second term” and “appreciate the vision you have set out.” (AP)

Covid: US President-elect Joe Biden gets vaccine live on TV