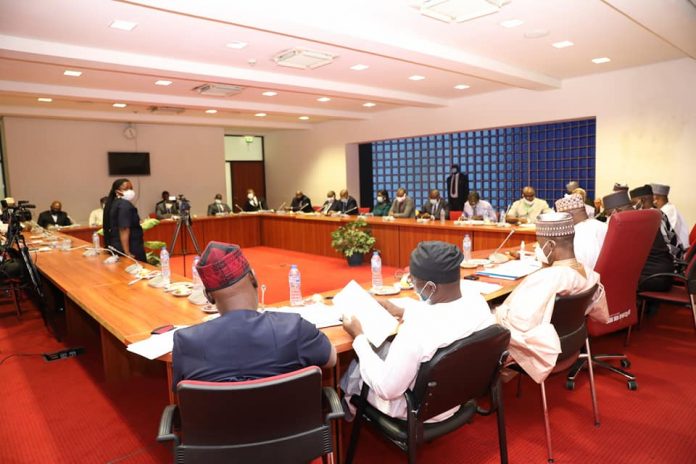 The Senate Committee on Anti Corruption and Financial Crimes has expressed the desire of the Upper Legislative assembly to see a reformed and rebranded Economic and Financial Crimes Commission (EFCC) in its fight against corruption, economic and financial crimes in the country.
This was stated by the Chairman, Senate Committee on Anti-corruption and Financial Crimes, Senator Suleiman Kwari, on Tuesday, October 6, 2020 at the commencement of the 9th Senate Legislative Anti Corruption Strategy Implementation Session at the National Assembly Complex.
Kwari advised that “Ninety per cent of investigation should be done before arrest is effected”, adding that “media hype must stop. If you want to be effective forget the media, do the work and let your work speak for you.”
He disclosed that the 9th Senate was determined to see that there was a constant flow of information and engagement between the Senate and the EFCC.
Deputy Chairman of the Committee, Senator Aliyu Wamakko, former Sokoto State governor, expressed concern on the Commission’s lean budgetary allocation for legal fees, noting that there must be adequate provision for legal fees in the EFCC budget for effective prosecutorial activities.
Addressing the Committee, the Acting Chairman of the EFCC, Mohammed Umar Abba, noted that the Commission has earned the confidence and trust of Nigerians because of its unblemished professional disposition.
“The EFCC is doing remarkably well above all other law enforcement agencies in the country and that is why the UNODC and National Bureau of Statistics in the 2017 survey they conducted ranked EFCC as the most effective government agency in Nigeria,” Umar said.
He disclosed that the Commission has recorded 646 convictions and recovered over N11billion in monetary assets this year, despite the restriction imposed by the Covid-19 pandemic.
Reacting to the senators’ enquiry on the state of seized vehicles by the Commission, Abba expressed pain at the deteriorating state of assets in the custody of the EFCC.
“We are working on this challenge and I am sure the attorney general of the federation is coming out with a gazette so that this issue will be a thing of the past, not only vehicles, but landed properties,” he said.
The EFCC boss also weighed in on the worry of the legislators on the waning impact of the Whistle-blowing policy of the federal government.
He blamed the situation on mischief and misinformation by members of the public who turned it to a tool for settling personal scores.
“It is true that the whistle-blowing policy has gone down, unlike what it was at the beginning of the policy, where we received several reports from whistle-blowers. People started being mischievous with the policy. So we have to tread carefully as people turned it into a personal vendetta tool against individuals,” he said.
He however revealed that the policy was being fine-tuned by the Ministry of Finance to make it more efficient.
The EFCC boss took the opportunity of the occasion to acquaint the legislators with the challenges confronting the agency.
These, he said, included lack of adequate personnel and office accommodation, (especially in the Commission’s zonal offices); lack of internet facility; and Information and Communication Technology equipments, among others.
He canvassed the support of the committee in overcoming these challenges through appropriation.
Other members of the Senate committee present at the session were:  Senators Michael Nnaji, Aliyu Abubakar, Kola Balogun, Abba Moro, Abubakar Yusuf and Dauda Binos Yaroe.
Please follow and like us: