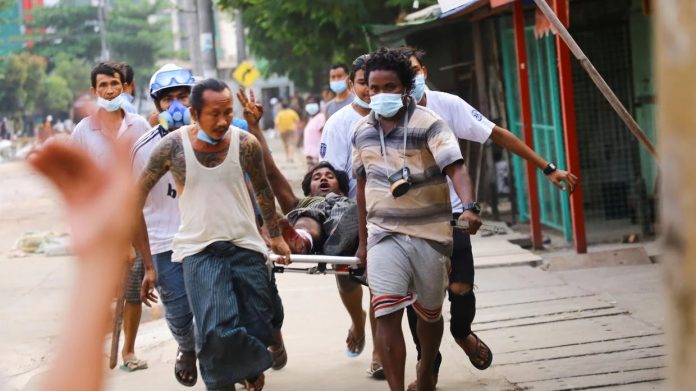 Dozens of people were reportedly killed in Myanmar over the weekend amid the increasingly lethal crackdown on anti-coup protests.

Despite the actions of the police and military, the protests continued into Monday.

Myanmar saw the bloodiest weekend since the beginning of the civil unrest that was triggered by the military seizing power on February 1.

According to local media reports citing hospitals, at least 59 people were killed and some 129 injured in the country’s largest city of Yangon alone.

Multiple videos circulating online show chaotic scenes captured across the country on Sunday, with protesters repeatedly coming under what is presumed to be live-ammunition fire from the security forces.

Images from the scene show multiple bloodied people being carried away by fellow protesters, with heavy gunfire heard in the background.

At least two townships in Yangon have been placed under “martial law” following Sunday’s violence, according to an announcement made by state broadcaster MRTV.

It’s the first time that the military, which has waged a massive crackdown on the protests, has used this term.
Despite the mounting casualties and tightening security measures, the protests continued across the country on Monday.

Sit-ins and vigils for the victims of the crackdown have been held at multiple locations.

Myanmar was plunged into chaos on February 1, when the country’s military seized power, ending the short nine-year period of civilian rule and triggering mass demonstrations against the coup. The military previously controlled Myanmar for decades, from the early 1960s until 2011.

The military alleged that the country’s recent election was fraudulent, and detained elected government head Aung San Suu Kyi and her fellow party leaders. Suu Kyi has been accused of other wrongdoings as well, including corruption and smuggling of illegal electronic devices. Supporters of the ousted leader, however, believe that the accusations have been made up.

Following the coup, the military declared a one-year state of emergency period. Last week, it reiterated its desire to hold elections and hand the power back to civilians after an unspecified “certain time” passes.