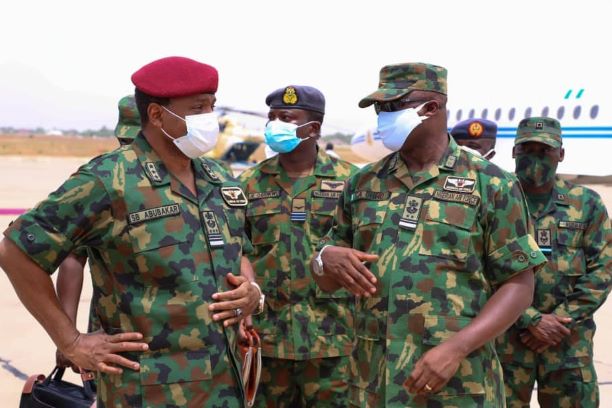 The Nigerian Air Force (NAF), through the Air Components of Operations HADARIN DAJI (OPHD), THUNDER STRIKE (OPTS) and GAMA AIKI (OPGA), has flown over 1,400 hours in the last 5 months, neutralizing about 369 bandits and other criminal elements in air operations conducted as part of efforts towards eliminating armed bandits, kidnappers, cattle rustlers and other criminal elements from troubled parts of the North West and North Central Zones of the Country. This was disclosed today, 4 June 2020, by the Air Officer Commanding Special Operations Command (AOC SOC), Air Vice Marshal (AVM) Charles Ohwo, while briefing the Chief of the Air Staff (CAS), Air Marshal Sadique Abubakar, during the CAS’ Operational Visit to NAF Units and Formations involved in anti-banditry operations in Katsina and Zamfara States. He stated that the 1,400 operational hours had been devoted to the accomplishment of 848 Air Interdiction (AI); Intelligence Surveillance and Reconnaissance (ISR); Battle Damage Assessment (BDA); Close Air Support as well as Tactical Airlift missions executed in 1,089 sorties with about 637,206 litres of Jet A-1 fuel expended from 1 January 2020 till date. According to him, the Air Components of the 3 Operations had continued to shape the battlespace to create the enabling environment for the Land Components to operate more effectively towards the total defeat of the armed bandits in order to bring peace to the troubled areas.

Speaking after the briefing at the OPHD Air Component Headquarters (HQ) in Katsina, the CAS commended the AOC SOC as well as the various Air Component Commanders and personnel of the 3 Operations for their commitment towards securing the lives and properties of people in the affected areas. He noted that it was no mean feat to plan and execute coordinated air operations covering 7 States, with the huge logistics requirements involved, to support the ground forces in the 3 Defence Headquarters (DHQ)-led Operations. He equally expressed excitement that the over 500-strong NAF Special Forces (SF) personnel were also adding value to ground operations, fighting alongside their Nigerian Army and Police counterparts to deny the bandits freedom of action.

Air Marshal Abubakar stated that HQ NAF, on its part, would continue to ensure the availability of attack and ISR aircraft as well as helicopter gunships, along with necessary logistics support at the various airfields as well as the new helipads at Katari, along the Kaduna -Abuja Highway, and Birnin Gwari in Kaduna State. He therefore urged the personnel not to give the bandits any breathing space but sustain the tempo of operations by locating all remaining bandits’ camps and neutralizing the criminals, wherever they may be found.

While urging the armed bandits in the affected areas to forsake their criminal ways, surrender and turn in their weapons to relevant authorities, the CAS further solicited the support of the people of the States in the North West and North Central, especially through the provision of useful information that would enable the NAF and sister Services to be even more effective in their operations. He encouraged the personnel to keep working in synergy with sister Services and other security agencies to ensure the restoration of a conducive environment for farmers to return to their farms and other inhabitants to pursue their legitimate aspirations. This, he stressed, would require relentless efforts and high level of commitment to ensure the bandits are decisively dealt with.

While in Katsina, the CAS also held a private meeting with the Emir of Katsina, Alhaji (Dr) Abdulmumin Kabiru Usman, where matters related to the anti-banditry operations were discussed and assurances of mutual support in terms of provision of intelligence, on one hand, and prompt, decisive action, on the other, were given. Before departing Katsina for Gusau, Zamfara State, the CAS also interacted with some of the SF personnel, urging them to bring their special skills to bear in ensuring that the bandits are denied the ability to kill innocent civilians.

In Gusau, the CAS inspected facilities at the 207 Quick Response Group (207 QRG) and was briefed by the Commander of the Unit, Air Commodore Adindu Ekwuribe, on the contributions of the Unit to ongoing operations in Zamfara State. Air Marshal Abubakar also met with the Zamfara State Governor, Honourable Bello Matawalle, whom he thanked for his support to the NAF and other security agencies. He also re-iterated his appeal for the provision of intelligence to facilitate effective operations in the State. The CAS noted that, as part of efforts geared towards ensuring adequate air support for ongoing operations in the North West and North Central, he had, in the past 2 weeks, visited Kaduna, Sokoto, Katsina and Gusau to assess and appreciate the successes recorded whilst identifying areas of challenge that would need to be addressed to enable more effective and efficient operations.

In his response, Governor Matawalle, while tracing the origins of armed banditry and cattle rustling in the Region, advocated a multi-pronged approach towards dealing with the problem. He said this would entail using the ‘carrot and stick’ method, with the military maintaining firm pressure on the bandits with its air and ground operations whilst continuing to extend the olive branch to bandits who were willing to repent and surrender their arms. In this regard, he emphasized that the military operations needed to be properly coordinated to ensure that the bandits find no safe havens in any of the States and that they are blocked from crossing from one State to the other

The CAS was accompanied on the visit by Branch Chiefs and Directors from Headquarters NAF.