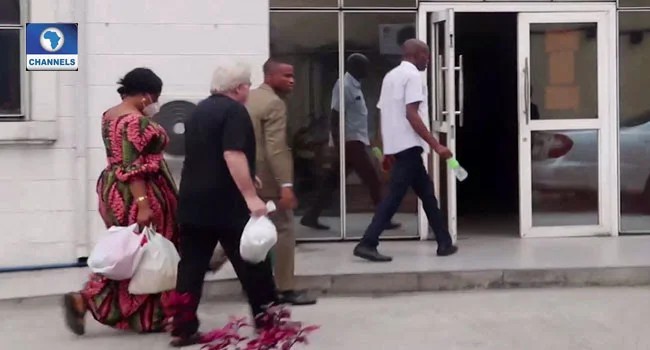 A Federal High Court in Port Harcourt, the Rivers State capital, has remanded a Dutch national, Peiter Borremans, and his wife, Nkechi Borremans to the custody of the Economic and Financial Crimes Commission (EFCC).

They are remanded for allegedly defrauding two firms of Three Hundred and Thirty Thousand ($330,000) meant for the purchase of a marine tanker vessel.

The defendants alongside a firm, Lagon Trade Limited were arraigned by the EFCC before Justice E. A. Obile of a Federal High Court in Port Harcourt, the state capital, on two counts bordering on fraud and felony.

The couple allegedly obtained the sum from two firms, Jackkyson Multi Services Limited and Alot General Services Limited on July 31, 2014, as part payment for the purchase of a marine tanker vessel.

The persons, however, pleaded not guilty to the two counts charge.

The presiding judge, Justice E. A. Obile, ordered that the defendants be remanded in the custody of the EFCC in support of the argument by the defence counsel, C.A. Okowanye following the spread of the covid19 pandemic, against the prayers of the prosecuting counsel, J.N Dogonyaro that the couple be remanded in the facility of the Port Harcourt Correctional Centre.

No protester was killed at Dangote refinery, says Traditional ruler

How inmate of Abuja prison overheard discussion to assassinate me —...