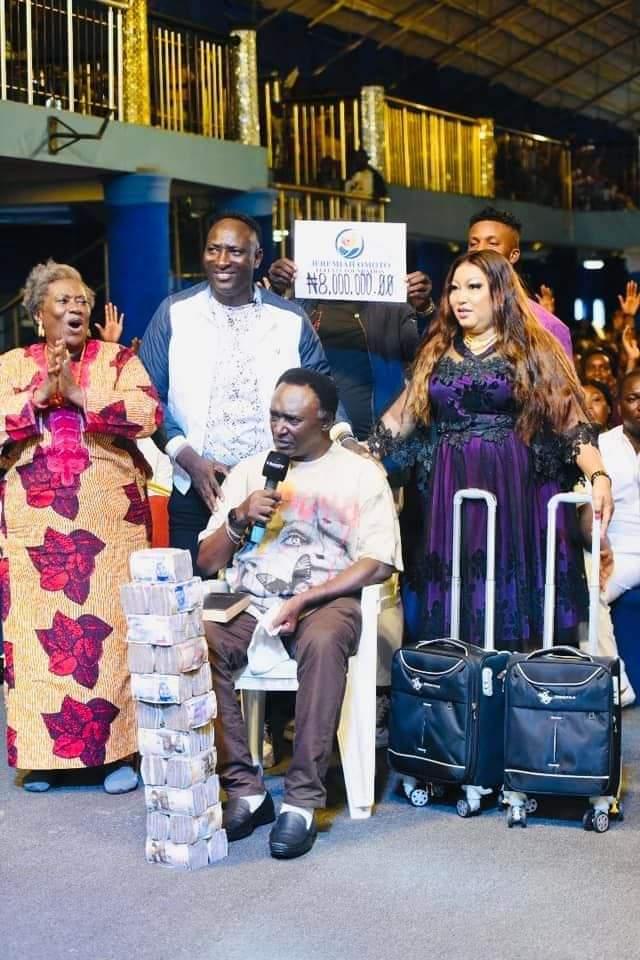 Ohameze, who recently announced that he is set to undergo a critical surgery to fix his cervical vertebrae and regain control of his limbs which had been affected by an accident he had in the past, said Nigerians should pray and not donate money for him.

Receiving the gift from Prophet Jeremiah, who is the founder and head prophet of Christ Mercyland Deliverance Ministry, Ohameze, who was in the company of his Nollywood colleagues, became emotional when the cash gift was announced during the church service.

The popular thespian had in a video that went viral on social media last week, narrated how a car accident he had some time ago deteriorated his health.

He said he visited an hospital after the accident and an x-ray was conducted on him and the result of the x-ray showed that his “cervical vertebrae 3 had collapsed on the 4th, thereby causing pressure on my spinal cord and the retardment of the lower limb.”

The movie actor disclosed further that after undergoing a further scan, he was told that he would have to undergo a procedural surgery to separate the cervical vertebrae three from four to free the spinal cord permanently.

“After they showed me the procedure and how it’s been done, I was scared. I was told that they are going to cut open the neck and physically separate the cervical vertebrae three from four and then use an iron plate to plate it with some screws so it can remain permanent,” he said.

Bobrisky apologises for asking Oba of Benin to marry him