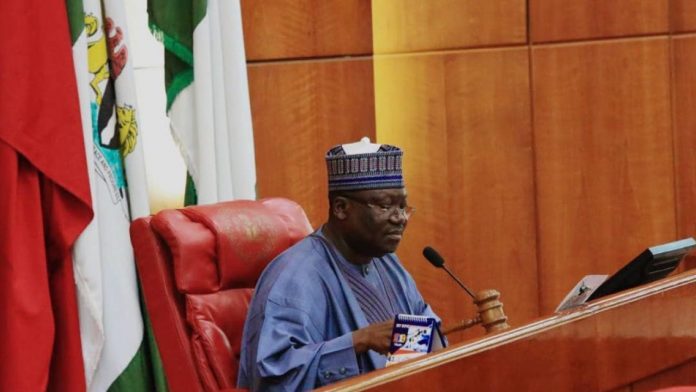 The gripping electoral drama of the day fittingly climaxed weeks of a political game of wits in Nigeria. That was on Tuesday 11th June, 2019, the day the Ninth National Assembly was inaugurated and its presiding officers were elected.

At the Senate chamber, the brightly clad Senators-elect were already seated well ahead of the 10 a.m schedule start of proceedings. When it was time, the Clerk of the National Assembly, Mohammed Sani-Omolori, read out the Presidential Proclamation for the inauguration of the Ninth Senate. After the roll call of the Senators-elect was taken, the first business of the day followed swiftly – the election of the President of the Senate. This was to be followed by that of his Deputy.

Given that the All Progressive Congress (APC has a clear majority in the Senate, the two elections should ordinarily be a formality of the coronation of its anointed candidates. But the party harboured no such illusion as that had not happened four years ago when APC first took government. On that occasion in 2015, it was left with a bloody nose as some of its members had cut a deal with the former ruling party, the Peoples Democratic Party (PDP), to snatch the leadership of the two chambers of the National Assembly. That hostile takeover would later shape relations between the two elected arms and affect the performance of the federal government.

While the event was in progress at the Senate chamber, President Muhammadu Buhari was at the Transcorps Hilton Hotel about a kilometer away. It was the venue of an anti-corruption forum sponsored by the Economic and Financial Crime Commission (EFCC). The National Leader of APC, Asiwaju Bola Ahmed Tinubu, was also at the forum, and like the President, his mind was apparently far away at the Senate chamber.Wary this time about history repeating itself, the APC leadership had worked assiduously to unite the party’s caucuses in the two chambers behind the party’s consensus candidates. Leaving nothing to chance, the APC chairman, Adams Oshiomhole, was there alongside other party chiefs to watch the proceedings and ensure no surprises this time around.

The day’s proceedings at the Senate chambers kicked off smoothly, until the announcement of the mode of elections. The APC had prepared for open balloting. But the Clerk of the National Assembly decided otherwise. Relying on what he called the extant rules of the Senate, Sani-Omolori said the election would be by open-secret ballots. This was completely against the expectation of the APC leaders and understandably made them very uncomfortable. The party sensed another ambush as the secrecy of the ballot meant it would not be able to monitor how its members voted.

This reporter was at another location monitoring the TV live transmission of the Senate proceedings and posting, via WhatsApp, a blow-by-blow account of the unfolding events to an aide of Asiwaju Tinubu who in turn was updating his principal.

When the final tally was announced, which gave Senator Ahmad Ibrahim Lawan an overwhelming victory as the new Senate President, Tinubu’s aide whose eyes were glued to his phone all through, scribbled a note on a small piece of paper and passed it to his boss. Tinubu, heaved a sigh of relief. He couldn’t keep the “breaking news” to himself so he stretched his right hand and passed the piece of paper to Buhari. The President responded to the information from his staunch political ally with a gap-toothed smile of relief.

Rwandan President Paul Kagame, the guest speaker at the forum, was seated next to Buhari but was oblivious of what was playing out. He wouldn’t understand our local politics. This was what the Nigerian ruling party had wanted in 2015. Nobody prayed for a repeat of that episode because of its negative consequences on governance.

Ahmad Lawan’s emergence as President of the Ninth Senate has gone some way in restoring party supremacy in politics and enhanced cooperation within the federal government. No more tension. No more acrimony. The cat and mouse relationship between the Federal Legislature and the Executive has given way to harmony and mutual respect as the two elected arms of government are again learning to sing from the same hymn book. Since then, presidential nominees for appointment have been screened without delay. Budgets and other executive bills and communications have been receiving deserved attention in the Senate without slowing down the activities of government.

Pundits, who love politics as a bloody game, gave this new development in inter-arms relations a wrong interpretation. They christened the Legislature a rubber stamp. To this misconception, Lawan unapologetically once responded: “We are so terribly misunderstood that when we say that we are going to work with the Executive arm of government in a very harmonious and productive manner, some people, some out of misunderstanding, some out of mischief, say it’s a rubber stamp National Assembly. But let me say this: no amount of distractions or blackmail will stop us from being united in the National Assembly for the benefit of Nigerians who elected us and nothing will discourage us from working with the executive arm of government for the betterment of our country.

After one year of its coming to existence, people are appreciating the perspective of the Legislature from the results that have been achieved that governance is enhanced when agencies coooperate rather than when they dissipate energy and resource on mutual antagonism. Setting that tone in his acceptance speech after his election, the new Senate President said: “Within us as a Senate, our leadership will commit to partnership rather than partisanship and between us and the Executive arm of Government, we will choose unity of purpose over conflict and discord while also working towards further strengthening and guaranteeing our independence and that of judiciary.”

Lawan has remained focused on that path of building trust and cooperation between elected arms in the arms in the past one year, more so that the two arms were elected on the same political platform. He has also ensured that the voice of the minority is not muted in the chambers. Senators of the opposition parties have been accorded full respect and recognition as representatives of their constituencies and allowed full participation in decision-making. The Senate under the leadership of Lawan has adopted a multi-partisan approach to decision-making and spoken with one voice on issues of national importance.

Before he assumed the leadership of the National Assembly, Lawan had an idea of the gigantic burden it entails. He has resisted anything that could distract his concentration on the job. Even when the leadership of his asked him to chair a committee saddled with resolving intra-party disputes and reconciling aggrieved members, Lawan politely turned down the assignment despite expressing full support for the party’s decision to set up the panel. Lawan’s only reason was that his duty at the National Assembly would not allow him to give the assignment the necessary attention. The party leadership understood his point and commended his forthrightness.

In the last one year, Lawan has devoted his time and energy to making the National Assembly work better. Given what has been achieved in the first year, the prospect is bright for the ninth Senate achieving its legislative agenda and supporting the federal government to always improve its service-delivery to the people of Nigeria.

The thriving aviation industry in Ondo and that Governor Akeredolu’s intervention, By STEVE OTALORO

PDP’s tag of defectors to APC as corrupt, By Ehichioya Ezomon