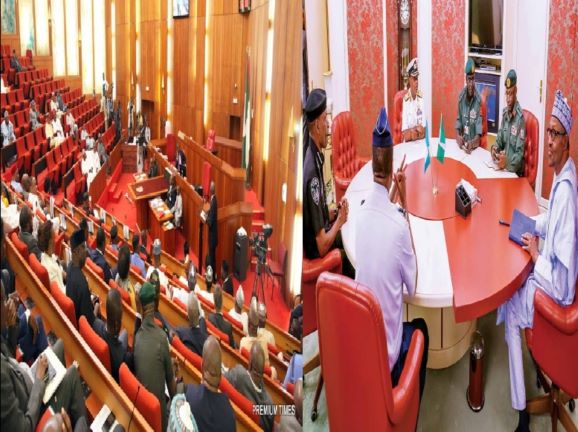 The Senate on Tuesday asked the country’s service chiefs to step aside to enable a new set with new ideas tackle insecurity across the country.

The resolution of the Senate was sequel to a motion by former Senate Leader and Chairman, Senate Committee on Army, Senator Ali Ndume, APC, Borno South, who came under Order 42(1) of the Senate Standing Orders as amended

Senator Ndume lamented the high level of casualties among the rank and file of the Military and other Security Agencies where over 21 Soldiers were ambushed in Gamboa in Borno State and also in Katsina.

The lawmakers accordingly asked its joint committee on security to find out why over 200 army officers deserted the service.

But in a quick reaction, the Presidency in a statement by Special Adviser to the President on Media and Publicity, Femi Adesina, reiterated that appointment or sack of Service Chiefs was a Presidential prerogative.

He stated that President Muhammadu Buhari, in his capacity as Commander-in-Chief of the Armed Forces, would do what was in the best interest of the country at all times.

2023: Zoning is not the solution to Nigeria’s problems, says Atiku

History of Ipetumodu: Apetumodu charges committee to be up and doing

Photo News: Leadership of National Assembly Meet with Members of the...

Behold the youngest member of the elite Permanent Secretary Cadre in...