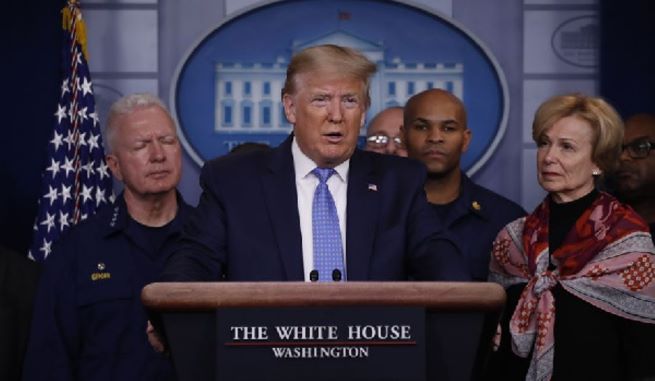 The head of the African Union Commission on Wednesday condemned U.S. President Donald Trump’s decision to suspend funding to the World Health Organization (WHO).

Moussa Faki Mahamat termed the decision “deeply regrettable” and said the world had a “collective responsibility” to help WHO during the COVID-19 pandemic.

“The US govt decision to suspend funding to WHO is deeply regrettable. Today more than ever, the world depends on WHO’s leadership to steer the global COVID-19 pandemic response,” he said in a Twitter post.

“Our collective responsibility to ensure WHO can fully carry out its mandate, has never been more urgent.”

The U.S. president announced Tuesday that he was suspending funding for the WHO, accusing the organization of “severely mismanaging and covering up” the spread of the coronavirus.

He said American taxpayers provide between $400-$500 million per year to WHO, while China gives about $40 million.

“As the organization’s leading sponsor, the United States has a duty to insist on full accountability,” said Trump.

The decision has also been criticized by Germany, with Foreign Minister Heiko Maas saying the accusations against the WHO were “not helpful” at a time when closer international cooperation was a need of the hour.

“The virus knows no borders. We have to closely work together against COVID-19,” he said in a tweet on Wednesday.

Germany’s top diplomat said it was essential to provide more support to the WHO, especially for the development and distribution of a vaccine.

The novel coronavirus has spread to at least 185 countries and regions since emerging in China last December, with the U.S. and Europe now the hardest-hit areas.

Nearly two million cases have been reported worldwide, with the death toll almost at 128,000 and close to 501,000 recoveries, according to data compiled by Johns Hopkins University in the U.S.

UniAbuja honours 44 staff members for role in rescue of abducted...

Trump orders withdrawal of most U.S. troops in Somalia