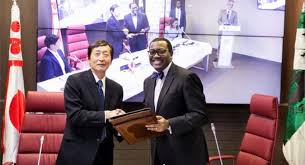 Leaders gathering for the United Nations General Assembly from 17-30 September 2019 in New York have made a strong plea for enhanced South-South cooperation to strengthen food security during a session co-hosted by the African Development Bank.

Speaking as part of this session on the role of South-South cooperation to achieve sustainable development for food security, Dr. Akinwumi Adesina, President of the African Development Bank, issued a call for rapid and immediate action.

“Enough! It’s unacceptable that 250 million Africans suffer from hunger. It’s time for action!” The indignation of President Adesina resonated with participants. “There are solutions that have been proven in the south that we should replicate on a large scale by combining all our resources,” he said.

His views were taken up by several speakers, such as Ibrahim Thiaw, Executive Secretary of the United Nations Convention to Combat Desertification, who said that the failure to take up such solutions reflects “our tendency to underestimate ourselves,” although South-South cooperation can be tremendously effective.

He was echoed by Vera Songwe, Executive Secretary of the Economic Commission for Africa, who said: “Rwanda is now a net exporter of rice, although it was a net importer in 2008. Guinea-Bissau, a net importer, could follow Rwanda’s example in taking advantage of Morocco’s leadership in inputs, the Food and Agriculture Organization’s (FAO) technical expertise, and financing from the African Development Bank.”

Africa could become the world’s breadbasket, Moroccan foreign affairs and international cooperation minister Nasser Bourita argued, “Recent South-South cooperation initiatives have been quite successful. The sustainability, stability and security (3S) initiative, begun by Morocco and Senegal to create jobs for youth, women and migrants through restoring degraded land, has been so successful that 14 countries have joined in,” he continued.

The anticipated $180 billion in food imports for 2025 will not be inevitable if appropriate solutions are implemented. To avoid this circumstance, the African Development Bank has launched a series of initiatives, all of which are grounded in multi-partner cooperation as part of its “Feed Africa” priority.

The African Development Bank has launched the Technologies for African Agricultural Transformation (TAAT) to help take technologies to scale for millions of farmers across Africa. The initiative brings together the Consultative Group on International Agricultural Research, national agricultural research centres, and private sector companies, on a common strategic technology delivery platform. In 2018, the TAAT maize compact, working with 30 private sector companies, delivered climate-smart maize varieties to 2.6 million farmers, who planted them on over 1 million hectares.

Through the South-South Cooperation Trust Fund, hosted at the Bank and funded by Brazil, efforts to transform 16 million hectares of savanna land of Africa into productive arable land for producing maize, soybean and livestock will be financed.

The Bank, in partnership with the Rockefeller Foundation, launched the Leadership for Agriculture platform to link ministers for agriculture and finance to develop investment incentives to drive agriculture. The Bank has also launched special agro-industrial processing zones to invest in infrastructure in rural areas to enable food and agricultural companies to locate there, driving the development of national, regional and global agricultural value chains.

5G: Our state of readiness is very high – Danbatta

Nigeria to be represented at World Track Cycling Championships for the...