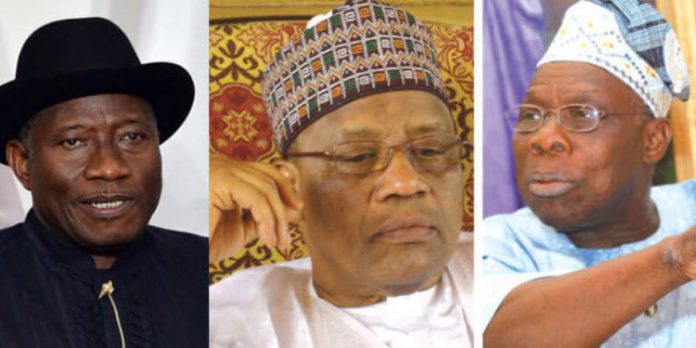 This is contained in the details of the 2020 Appropriation Bill presented to a joint session of the Senate and House of Representatives.

The details of the fiscal document obtained by our reporters also showed that others who will also benefit from the budgeted entitlements include General Yakubu Gowon, Abdulsalami Abubakar, Chief Ernest Shonekan, Ebitu Okiwe, Oladipo Diya, Atiku Abubakar and Namadi Sambo.

The budgetary allocation is listed under the omnibus “Service Wide Vote” domiciled in the Presidency as “Entitlements for former Presidents/Heads of State and Vice Presidents/Chief of General Staff.”

Also listed under the Service Wide Vote are the benefits for retired Heads of Service of the Federation who are to enjoy a whopping N4.502 billion, while retired Chief of Defence Staff, Service Chiefs, Generals and Colonels are to receive a cumulative N3.88 billion.

Retired workers of the Nigerian Airways who have been agitating for their benefits will also have course to smile under the budget as the government made a provision of about N16 billion for them.

A greater majority of retired Nigerian Airways staff are said to have died without receiving their entitlements.

Also contained in the budget is N20 billion voted as University Revitalisation Fund which is said to be part of the agitation by the Academic Staff Union of Universities (ASUU).

A source in ASUU told one of our reporters that “N20 billion is a far cry from the funds required by union for the revitalization of the universities.”

He noted that “it is unacceptable that the government did not make any provision for the long overdue allowances owed our members all over the country.”

Equally contained in the budget is the provision for the Federal Government to pay electricity bills of Ministries, Departments and Agencies (MDAs) to the tune of N5billion in the 2020 fiscal year.

There is an additional proposal to construct a “Presidential Wing” at the State House Medical Centre with the sum of N416,668,229.

Besides the State House budget also made provision for conversion/upgrade of “Villa Ranch” and construction of wildlife conservation capture in the sun of N14,344,026.

The proposed reconstruction and furnishing of the security building within the Villa, including extension of bodyguards kitchen is to cost N18,502,943 while the sum of N6,197179 would be expended for the rehabilitation of animal enclosure/procurement of Veterinary laboratory equipment in the State House.

The Presidency would also purchase plant nursery equipment for production of local flowers for routine floral arrangement, irrigation and upgrade of helipad grass field at the sum of N11,924,777, while the systematic collection and assessment of data about projects and programmes to aid management to make decisions in the State House is to cost N25,419,885

The budget document also contained a provision for the cleaning and fumigation of the office of the National Security Adviser (NSA) in the sum of N52,219,699.

In addition, the Federal Ministry of Police Affairs proposed amount for refreshments and meals is N38,620,353 with honorarium and sitting allowance of N6,338,158 and welfare packages of N31,600,481.