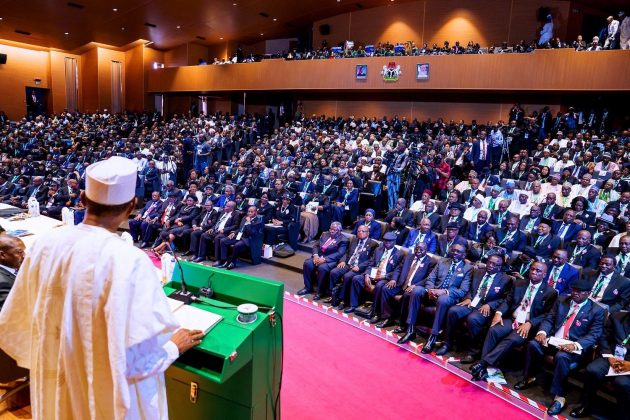 Against the backdrop of the dreaded covid-19 disease, about 20 Nigerian judges from Osun State judiciary have gone into self-isolation following their return from an international conference in Dubai, United Arab Emirates.

This was just as the test conducted on Governor Gboyega Oyetola and his wife, Kafayat Oyetola returned negative.

Addressing a press conference inside the Oke fia Government House on Wednesday, the governor hinted that the government had commenced contact tracing of the first confirmed coronavirus case in the state.

According to Oyetola, “sadly, I want to say that we have the first confirmed case of the novel covid-19 in the state. It was confirmed by the Nigeria Centre for Disease Control (NCDC). The case is a returnee from the United Kingdom and is currently receiving treatment.”

“The sample was tested at NCDC accredited Testing Centre, which is the African Centre of Excellence in Genomics of Infectious Diseases, Ede, Osun and the result returned positive on Tuesday night. However, this confirmed case is not the first one we will be subjected to investigation. But so far all the others have tested negative.”

“The government had contacted the family of the patient and has since commenced contact tracing to identify people who might have been in contact with the confirmed case. Considering the fact that I was in Abuja for the better part of last week, as a way of leading by example, I have also subjected myself to test. My wife, because of her recent travel history also subjected herself to test. Both came back negative”, Oyetola remarked.

He continued, “to this end, I want to passionately encourage all returnees from UK, US, Europe, the West African Coast and indeed other high-risk countries to self-isolate and submit themselves to test, so as to assist the government in containing the spread of the virus. The emergency number to call is 293. Other numbers are 08035025692, 08033908772 and 08056456250.

“To further contain the spread of covid-19, the following measures take immediate effect: One, a taskforce has been set up to man all the state land borders and conduct preliminary screening. Two, all major markets will be shut down with effect from Friday, March 27. However, traders are allowed to sell food items in front of their houses. Pharmacies are also exempted from this ban.”

“Three, the ban on public gatherings, church services, Mosques, social events and political meetings among others remain in force. Fellow citizens and residents of our dear State, do not to panic, the case, is under control. I want to urge you all to continue to observe necessary precautionary measures by regularly washing your hands with water and soap and also maintain the prescribed social distance.”

“As part of our efforts to curb the spread of covid-19 in the state, we have set up holding centres and the one in Asubiaro Specialist Hospital, Osogbo, is up and running, to isolate and treat suspected and reported cases of the virus in the state”, Oyetola stated.

Meanwhile, speaking during a chat with journalists shortly after the press conference, Osun State Commissioner for Health, Dr Rafiu Isamotu disclosed that about 20 judges who recently returned from an international conference in Dubai, United Arab Emirates have gone into self-isolation.

He assured that the state government would explore all precautionary measures to tackle the spread of coronavirus in the state. (Agency report)

When Will Our Tomorrow Come? By Douglas Ogbankwa, Esq.

Minister advises Perm. Secs to always think outside the box

Security is not something you can put a timeline on, says...