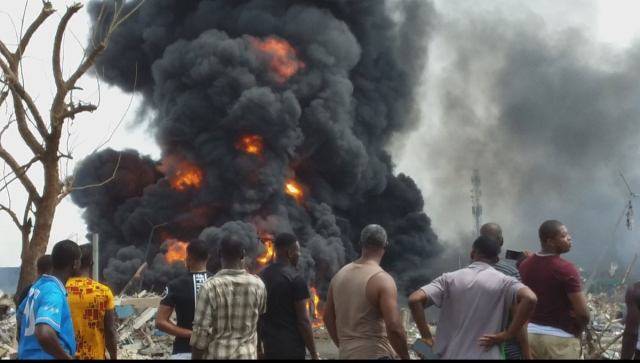 A scene of the gas tanker explosionExplosion
Lagos, Sept. 24, 2020 (NAN) No fewer than 15 persons were injured and several cars and property destroyed following a gas tanker explosion on Thursday at Balogun Bus Stop in Ifako-Ijaiye Local Government Area of Lagos State.
Mr Ibrahim Farinloye, Acting Zonal Coordinator, South West Zonal Office,
National Emergency Management Agency (NEMA), confirmed the development to the News Agency of Nigeria (NAN) in Lagos.
NAN reports that the incident occurred barely 24 hours after a petroleum tanker exploded and killed over 20 persons at Felele, in Kogi.
Farinloye said the Lagos incident occurred at 3.05p.m. when the gas tanker, which was trying to enter Cerato Gas Plant located in the area, suddenly went up in flames.
He said: “16 vehicles, two tricycles, two gas tankers, an event centre and one church building was destroyed.
“Also damaged were; a block industry and an attached office, a cement store and a sawmill and several stores where building materials are being sold.
“The people injured were immediately taken to the Water Works Clinic. 15 people were admitted there.
“Two that were critically injured have been referred to the General Hospital. Three are presently on admission and are being observed.
“The remaining 10 had minor injuries and have been discharged.”
Farinloye said NEMA promptly alerted other emergency responders including the Lagos State Emergency Management Agency , Lagos State Fire Service , the Police and the Nigerian Security and Civil Defence Corps
“The response was swift and the fire has been extinguished. Some of the injured persons told us that they immediately jumped into a nearby canal which was filled with water as it rained today.
“That is one of the major reasons that there was no fatality,”he said. (NAN)
Please follow and like us:

Wanted drug dealer caught in church, another excretes 68 wraps of...