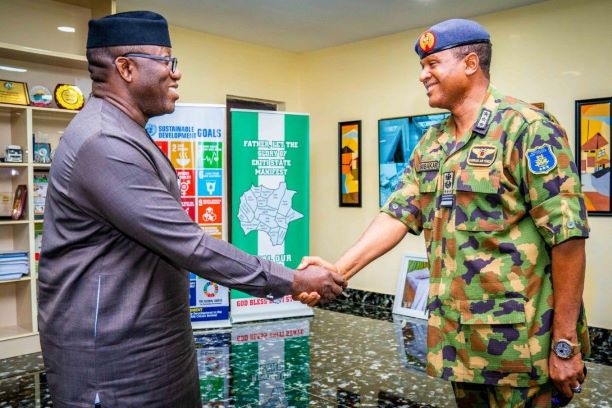 The Chief of the Air Staff (CAS), Air Marshal Sadique Abubakar, has reiterated the unwavering commitment of the Nigerian Air Force (NAF) to the safety and security of Nigeria and Nigerians.

He said; “the NAF, working in synergy with other security agencies, would continue to do everything humanly possible to ensure that Nigerians remain secured, wherever they live in the Country.”

The CAS made this commitment during a visit to Ekiti State governor, Dr Kayode Fayemi, at the Government House in Ado-Ekiti,

The CAS was in the State to assess the site for the proposed International Agro-Allied Cargo Airport being developed by the Ekiti State Government.

The CAS said that the NAF in furtherance of President Muhammadu Buhari’s policy thrust of ensuring the security of all Nigerians, had established 13 new units across the Country in the past four and a half years or there about.

He said these included Quick Response Groups (QRGs) and Wings (QRWs) as well as Detachments at Ipetu Ijesha in Osun State, Gusau in Zamfara State, Owerri in Imo State, Daura and Katsina in Katsina State, Gembu in Taraba State and Agatu in Benue State as well as a Combat Search and Rescue Group (CSARG) at Kerang in Plateau State.

He noted that the Federal Government’s commitment to the security of the Nation was also reflected in the fact that it had acquired 22 brand new aircraft for the NAF in the last four and half years, with another 16 due for delivery soon.

He said these included an additional Mi-17 helicopter, which is expected to arrive in April 2020, as well as three JF-17 Thunder multi-role fighter aircraft and 12 Super Tucano attack aircraft, which would be delivered to the NAF in November 2020 and early Year 2022, respectively.

Air Marshal Abubakar remarked that he was excited about the Ado-Ekiti Airport project because it would further boost the ability of the NAF to project air power in the South West Zone, since the Service would be able to conduct operations from the Airport.

He equally noted that the socio-economic benefits of such a project would also have a positive impact on security as many youths wouth be employed and economic activities would undoubtedly receive a boost.

He therefore assured the Governor as well as the Government and good people of Ekiti State of the NAF’s support towards the realization of the project.

Governor Fayemi, while welcoming the CAS to the State, in what he termed a historic visit, stated that he was delighted by the promptness of Air Marshal Abubakar’s responses to the requests made concerning the actualization of the Ekiti Airport Project.

He said a manifestation of this was the fact that the CAS was in Ekiti State just over a month after the first meeting was held in Abuja for preliminary discussions to solicit the NAF’s support for the project.

He noted that the proposed Airport, apart from serving as a Base to enhance the NAF’s Air Defence capability in the South West and, of course, boosting the agriculture value chain in the State, would also allow for the world to benefit from the vast knowledge base in Ekiti State with the establishment of a Smart City to leverage the knowledge-economy.

He equally highlighted that Ekiti State has one of the best teaching hospitals in the Country, the Afe Babalola University Ado-Ekiti Teaching Hospital (ABUADTH), which carries out open heart and other complex surgeries almost on daily basis.

He said having an Airport in Ado-Ekiti would make it possible for people from within and outside the country to more easily access the excellent medical services at the hospital.

He said the proposed International Agro-Allied Cargo Airport would therefore undoubtedly have positive effects on the development and security of Ekiti State and indeed the entire South West Zone of the Country.

Coordinator of the Airport Project, Air Vice Marshal (AVM) Adeniyi Ojuawo (retired), while giving a brief on the project, said that most of the necessary approvals for the take-off of the project had been obtained.

He therefore expressed optimism that construction work on the 3.4Km, Category IV runway, which could support support all levels of civilian and military air operations, would soon commence.

The CAS was accompanied on the visit by the NAF Chief of Training and Operations, AVM James Gwani; Chief of Logistics, AVM Mohammed Yakubu; Director of Plans NAF, AVM Emmanuel Alade; the Director of Air Traffic Services, Air Commodore Adeniyi Amesinlola, as well as other senior staff officers from the NAF Headquarters.

CAN congratulates Christians on Easter

Nigeria @ 60: CAN appeals to Buhari to sign Electoral Reform...

Aisha Buhari is neither pregnant nor sick, aide clarifies