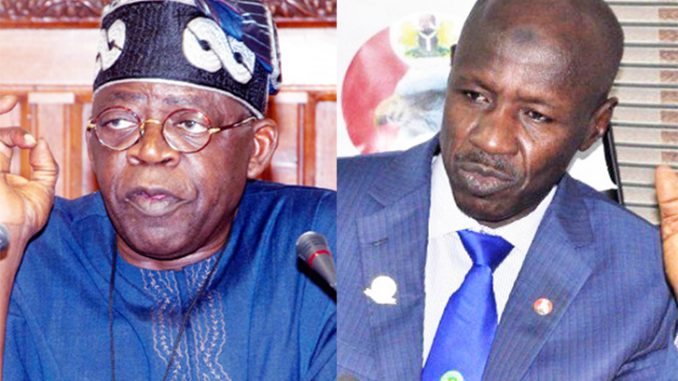 Apart from Adeyanju, other activists who signed the petition were Ariyo-Dare Atoye of the Coalition in Defence of Nigerian Democracy and Constitution, and Adebayo Raphael of the Free Nigeria Movement.

Tinubu had spoken to newsmen after casting his vote then that if bullion vans were found in his compound, whatever it contained were his. He said he was not afraid as he had never worked, or did contracts with government since he left office as governor. A cross of Nigerians had tackled the EFCC for not questioning Tinubu over the bullion vans.

Adeyanju, told newsmen: “Remember, a few days ago, the EFCC challenged Nigerians that the reason they cannot investigate Asiwaju Bola Ahmed Tinubu over the election eve bullion vans sighted at his residence was because there was no petition to that effect.

“Some of us have already taken up the challenge, which is exactly the reason we are here and, basically, I believe that as citizens of our country, we must always ensure that the right thing is done at all times. You can see that, even as we are addressing the Press, members of the EFCC are harassing us, instead of going to Bourdillon to go and do this work.”

According the petition, Section 7 (1) (b) of the EFCC Establishment Act 2004 gave the commission the power to investigate properties of any person that appeared to the commission that the person’s lifestyle and extent of the properties were not justified by his source of income.

The issue of the bullion van is being visited at a time there are speculations that Tinubu, a South Westerner, is interested in the 2023 presidency.

The North, going by its utterances of some its leaders, also wants the position after Buhari, insisting that the constitution did not provide for rotation of the position. South East also wants to produce Buhari’s successor, if there must be justice and fairness, since North, South South and South West had had a taste of the number one position since return of democracy. South West seems to be rooting for Tinubu as the only one who has the political clout to square up against North.

Thus, the petition against Tinubu is seen as an attempt to topple the apple cart. But, this may not come to pass as Adams Oshiomhole, the party’s National Chairman, had earlier stated that even if anyone stole, he becomes a saint, once in APC.

Immediately the petition was submitted to the EFCC, the APC challenged the petitioners to prove that Tinubu stole money. Abiodun Salami, APC spokesman in Lagos State, said: “Let them come up with the proof. The man is a private citizen and he has been out of government for the past 12 years. If he has decided to spend his money on his party, how is that a problem? Let them come up with a proof that somebody’s money is missing.”

During an interaction with journalists, Magu avoided questions on it. He stated: “You want me to talk about a petition here? Next question, please.” His response aroused fears that EFCC under Magu may not probe Tinubu, who played major role in APC formation and emergence of Buhari as two-term president.

The Arewa Youths Consultative Forum (AYCF) in its reaction, through Yerima Shettima, its President General, said Nigerians should not to expect Tinubu’s prosecution by the EFCC. According to him, “Nothing will come out of the investigation because he is an APC member.”

Shettima added: “It’s an allegation and all Tinubu needs is to come forward and make clarifications and I just hope that the so-called institution, which is the EFCC would do the necessary thing by looking into the issue.

“The petition submitted to the Economic and Financial Crimes Commission (EFCC) by some group of activists headed by Deji Adeyanju is something that requires the attention of all Yoruba sons and daughters.

“We are not saying that Deji Adeyanju and other activists, who signed the petition, don’t know what they are doing. What we are saying is that the action amounts to washing our dirty linen in the public.”

Pan-Yoruba socio-political organisation, Afenifere, said it would be surprised if the EFCC commences investigation against Tinubu. Yinka Odumakin, Afenifere National Publicity Secretary, said: “It would be a surprise to see the EFCC finding corruption in APC. What would be the basis of Oshiomhole’s open invitation to thieves to come to APC and have their sins washed in the blood of ‘change’ if EFCC begins to see corruption in the ruling party?”

Debo Adeniran, Executive Chairman, Centre for Anti-Corruption and Open Leadership (CACOL), stated: “It is the constitutional rights of the petitioners to suspect anybody and do a petition. It is a wiser way of treating such cases instead of going to the media. Nobody is above the law. The argument of the other side should also be listened to. At the end of the day, Nigerians will know the result of the petition and possible prosecution.

“If there is no evidence against Tinubu, the case is dead on arrival. There is no law against people calling bullion vans if there are sensitive materials or properties to be conveyed. If cash is involved, a case of money laundering may be established. Apart from cash, bullion vans may be used to convey sensitive documents, treasures, like jewelries, land documents, wills, that people cherish. Bullion vans are bulletproof and highly secured.

“If Tinubu does not have any skeleton in his cupboard, he should submit himself to be probed. If the petition is malicious, Tinubu can sue the petitioners for libel and defamation if he can explain the presence of the bullion vans without implicating himself as the owner of the premises. The vans could have been driven there without his knowledge. If invited by the EFCC, Tinubu should honour the invitation. If culpable, he should be prosecuted.” (Independent)

Economist lauds NASS for passing 2021 Budget in record time, but…