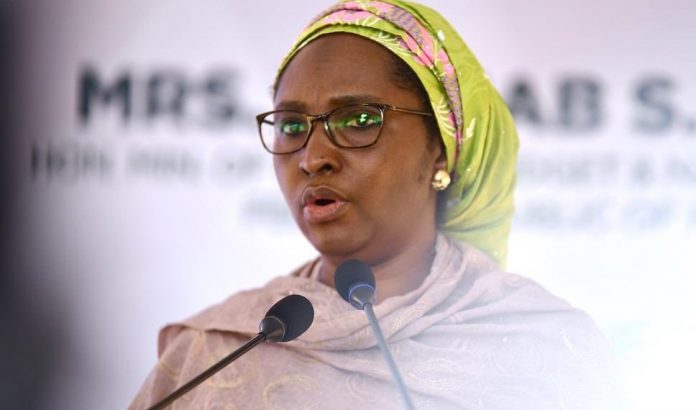 The Senate has mandated six of its Committees to engage the Minister of Finance, Zainab Shamsuna Ahmed, on the Federal Government’s elapsed Economic Recovery and Growth Plan (ERGP) between 2017 and 2020.

The decision to engage the Finance Minister, according to a statement by Ezrel Tabiowo, Special Assustsht (Press) to the Senate President, was reached amid a resolution by the Upper Chamber after it considered a motion “on the need to critically assess the performance of the Economic Recovery and Growth Plan (ERGP) 2017-2020.”

In his presentation, Senator Kwari noted that the four year Economic Recovery and Growth Plan (ERGP) 2017-2020, which was the source document of Nigeria’s four years Appropriations Act had elapsed.

He recalled that President Muhammadu Buhari, launched the Plan in April of 2017 to ensure the actualization of a sustainable inclusive growth of the economy.

According to the lawmaker, “the Plan was targeted at achieving a structural economic transformation with emphasis on improving the efficiency of both the public and private sectors of the Nigerian economy;

He added, “Further aware that the key objectives of the plan were to increase our national productivity, achieve a sustainable diversification of production, significantly grow our economy by 7 percent by the year 2020, maximize the welfare of our citizens and attain food and energy security;

“Worried that the four-year plan, which has now elapsed, cannot be said to have met our desired socio-economic aspiration;

“Believes that there is need for stock taking to critically assess the performance of the Economic Recovery and Growth Plan in order to ascertain whether the Plan has met the desired goals now that it has technically come to an end;

“Further believes that in taking stock, it is imperative to benchmark the implementation outcomes of the Plan in terms of the following indices to determine: real growth in the agricultural, solid minerals and energy sectors of the economy; SMEs growth as laid out in the plan; and positive impact on our industries and manufacturing sectors.”

Others are to assess investment on the human capital; the number of jobs and wealth created; investments on health and education sectors; investment and progress on our national infrastructure; progress made by the Presidential Enabling Business Environment Council (PEBEC); the digital led economy targets and the anti-corruption fight/recovery of stolen assets; the progress of the fight against insecurity; determine the fiscal and other macroeconomic policies as benchmarked in the ERGP; and the level of implementation of the Central Bank of Nigeria interventions in all the sectors.

Senator Kwari lamented the negative impact of the COVID-19 pandemic on the world economy, as well as its consequent effects on the Nigerian economy, which, according to him, had adversely affected the implementation of the Plan in 2020.

He stressed that it is the solemn and constitutional duty of the National Assembly to assess the performances of the budgets as against the line items and objectives of the ERGP, on which it was based.

Accordingly, the Senate mandated the Committees on National Planning; Banking, Insurance and Other Financial Institutions; Marine Transport; Land Transport; Works and Power to interface with the Hon. Minister of Finance, Budget and National Planning on the performance of the ERGP, whose life span has elapsed and report back on the way forward within four weeks.

Contributing, Senator Adetumbi (APC, Ekiti North), said the move by the upper chamber seeks to “take stock of what we have done under ERGP in order to ascertain future plans and learn lessons from existing ones.”

Senator Abdullahi Ibrahim Gobir (APC, Sokoto East), said the assessment was imperative to determine whether or not Nigeria had made progress or failed in terms of growing the economy.

“We have to look at the Economic Team, how qualified they are to monitor some of these projects. If they are not qualified, we remove them and then bring qualified people.

“Because the Federal Government cannot have a plan for four years and yet we cannot have information about whether that plan has failed or succeeded. I think we have to find out some of these issues”, he said.

On his part, the Deputy Whip, Senator Aliyu Sabi Abdullahi (APC, Niger North) said, “the issue of national planning is something should always be in the front burner of our discuss.

“Attempt in the past to have a very concise National Planning framework has always met with some level of either policy flip-flop or instability.”

“Let me say that the ERGP which was meant to be operated for four years was actually coming at the heels of the recession we suffered in 2016 and, I think, the ERGP was packaged bearing in mind the issues that led to that recession.

“Having operated that from 2017 till date, let’s not forget that government came up with what they called Economic Sustainability Plan and, I think, the National Assembly played a critical role in how these plan was packaged, bearing in mind that the ERGP was not going to perform the functions it was meant to do”, he added.

(Press Statement) RE: BENUE PEOPLE DRINK BEER FROM 9 AM TILL...

CoS to Borno Governor, Babagana Wakil, is dead

Without technical, vocational education, attainment of SGDs by 2030, is a...