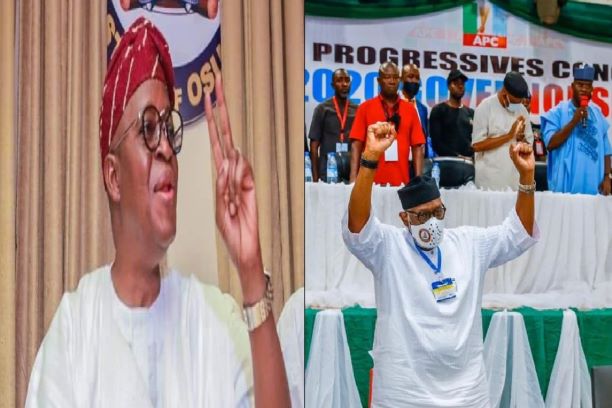 By Richard Akintade in Osogbo

Ahead of the October governorship election in Ondo State, Governor Adegboyega Oyetola of Osun state and member of the All Progressives Congress (APC) National Caretaker/Extra-ordinary Convention Planning Committee, has appealed to the stakeholders to see the outcome of Monday’s primary election as a no victor, no vanquished situation.

He charged the party’s faithful and stakeholders to unite and rally support for the party’s candidate and incumbent Ondo Governor,  Arakunrin Rotimi Akeredolu, SAN, with a view to ensuring that APC retains the State.

Akeredolu, emerged as candidate of the party early Tuesday morning after a keenly-contested primary election.

Reacting to Akeredolu’s emergence through a statement by his Chief Press Secretary, Ismail Omipidan, on Tuesday, Oyetola said it was a no victor and no vanquished situation for the individual party members, adding that after the primary, what should now be paramount is the collective victory of the party in the October governorship election.

He said, “I am happy that we had a rancour-free congress in Ondo. The outcome should be seen as a no victor, no vanquished situation.

“I congratulate my brother and colleague on his emergence. With his emergence and support of our party faithful and critical stakeholders in the State, I have no doubt that victory is assured for our party, the APC, in October.

“I salute our party faithful and stakeholders, especially all the governorship aspirants, for their courage and loyalty. I want to sincerely appeal to those who left for one reason or the other to return to our big political family, as APC is big enough to accommodate all, ” the Osun Governor added.

In a related development, Governor Adegboyega Oyetola has congratulated his Ondo State counterpart, Arakunrin Rotimi Akeredolu (SAN), on his 64th birthday anniversary, saying the Governor had shown strong commitment to the development of Ondo.

He said: “On behalf of my family, government and the good people of Osun, I join family, relatives, friends, well-wishers and people of Ondo to congratulate Governor Rotimi Akeredolu (SAN) on his birthday celebration.

“Governor Akeredolu is no doubt an accomplished legal practitioner, outstanding leader and astute administrator, who has exhibited strong commitment to the development of Ondo State and its people. I wish him more years of visionary leadership for the people of Ondo.

“I pray God Almighty continue to grant him good health and more wisdom to serve the people of Ondo, Nigeria and humanity in general”, he said.

BREAKING: House of Representatives adjourns till Friday over rowdy session on...

House of Reps would work at domesticating Kampala Convention- Speaker