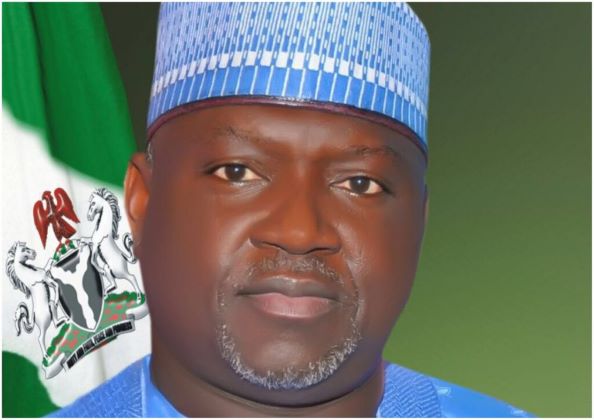 The NASC had, on Wednesday, retired the Clerk alongside 149 others but the Clerk informed all staff members and the general public that the extant regulation as contained in the Revised Conditions of Service duly passed by both Chambers of the 8th National Assembly “put the retirement age of staff members at 40 years of service and 65 years of age whichever comes first.”

In the query referenced NASC/CHO/I/2 and dated July 16, 2020, from the Commission, Sani-Omolori was given 24 hours to state reasons why he should not be punished for issuing a press statement on July 15, 2020, in which he stated that the retirement age for the staff members of National Assembly is 40 years in service or 65 years of age whichever comes first. 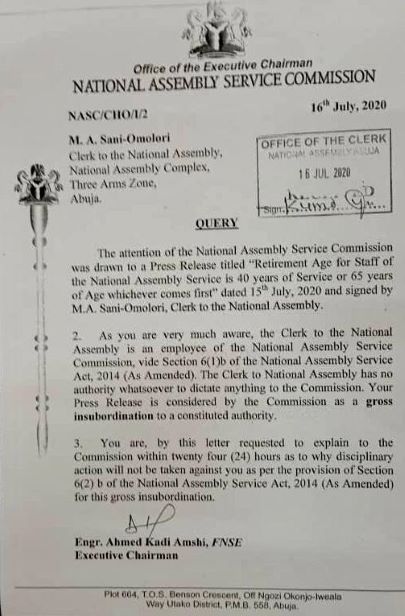 Amshi, citing section 6(1) b of the commission act of 2014 explained that Sani-Omolori was an employee of the commission and issuing such statement was clearly outside his capacity and as such, deserved to be sanctioned except he proved otherwise

“The Clerk to the National Assembly has no authority whatsoever to dictate anything to the commission. Your press release is considered as gross insubordination to constituted authority.

“You are by this letter asked to explain to the commission within 24 hours as to why disciplinary action will not be taken against you as per the provision of section 6 (2) b of the National Assembly Service Act 2014 as amended for this gross insubordination.”

NUPENG threatens to shut down services over attack on NLC peaceful...

We ‘ll deploy rule of law in fight against corruption, says...