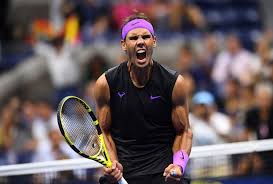 In one of those occasional and stupendous sporting events that winds up flattering the runner-up every ounce as much as the winner, Rafael Nadal spent Sunday evening withstanding a donnybrook rich in gasping points. A U.S. Open final almost without peer grew so towering that the far-fetched story within it seemed to outweigh even the long-term significance it wound up creating.

Daniil Medvedev, the 6-foot-6, 23-year-old Russian who looks like he has never encountered a fat gram, revealed a huge heart inside his beanpole frame in the 4 hours 49 minutes of his 7-5, 6-3, 5-7, 4-6, 6-4 loss to Nadal. Medvedev ratified the surging summer on North American hard courts that led him to a No. 5 ranking with a big comeback that seemed to uproot all entrenched tennis understanding.

First, he plunged understandably, if gamely, into a two-set, one-break deficit against one of the sport’s most unyielding forces. Then, he reached into a deep bag of varied shots until his opponent got rattled and the Arthur Ashe Stadium crowd chanted his name.

When his last try at a forehand return of a 124-mph Nadal serve floated out, it had overarching meaning. It meant that a Grand Slam title tally between Roger Federer and Nadal that used to stand at 4-0, then 7-1, then 12-3, then 16-6 had narrowed all the way to a dizzying 20-19 as of Sunday night in the final Grand Slam tennis match of the exhausted decade. Nadal had a fourth U.S. Open title to complement his one from the Australian Open, his two from Wimbledon and his 12 from the French Open. That brought the Spaniard to the closest point in this 16-year chase since Federer led 1-0 in 2003 when, at 21, the Swiss artist won Wimbledon over Mark Philippousis’s frightening serve and received as rewards, among other things, a Swiss cow.

Now, it might be the abundant Federer fans having a cow.

Yet the crowd had something unforgettable, as well as a fresh impression of a player who aired his own deep well of fight against the sport’s greatest fighter. Somehow, by late in a 63-minute hell of a third set, as Medvedev fought from a service break down and helped usher the match into mind-bending caliber, the Arthur Ashe Stadium crowd began chanting: “Medvedev! Medvedev!” After the kerfuffles between U.S. Open crowds and Medvedev earlier in the tournament — a middle finger made a cameo appearance — that came as its own upset.

Newsdiaryonline editor narrates how he tested positive for COVID-19

Ngige’s sermon on the mount, By Femi Adesina