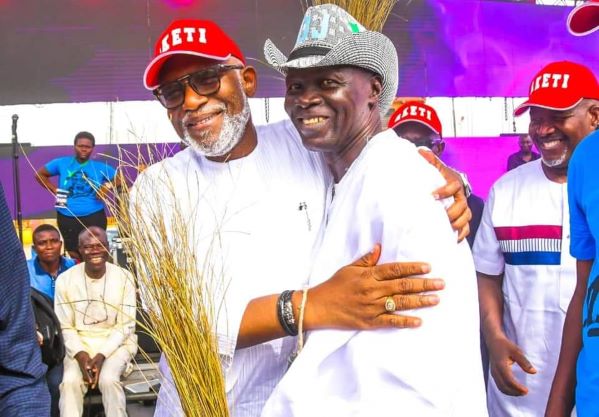 In a move seen as a major boost to the second term bid of Governor Oluwarotimi Akeredolu, SAN, former Deputy Governor of Ondo state, Alhaji Lasisi Oluboyo yesterday, joined the camp of the All Progressives Congress(APC).

Oluboyo defected from the opposition Peoples Democratic Party(PDP) alongside 13 other founding fathers and leaders of the party at a mega rally to mark the third anniversary of the governor.
Aside Oluboyo, other PDP leaders who led their supporters to join the APC were the pioneer chairman of the party in the State, Col Samuel Awodeyi(rtd), former chairman of the States Local Government Service Commission, Chief Olabisi Johnson, onetime commissioner, Taye Akinyele, six former council chairmen, as well as other leaders.

The state chairman of the APC, Ade Adetimehin disclosed that the former deputy Governor and the PDP leaders, by his records, were bringing on board about 10, 000 across the 18 local government areas of the State. This is even as he assured them of fairness and equity in the affairs of the party.

The defecting leaders who were all present at the mega rally organised by the APC in Ondo state said they were encouraged by the performance of the State governor in the last three years and had decided to join hands with him to move the state forward.

Speaking on behalf of the decampees, Johnson who was a close ally of the late governor, Olusegun Agagu, emphasised the need to work hand in hand with Governor Akeredolu.

He described the governor as a honest leader whose performance in office has disproved critics.

“We have been in politics for a long time, this is one leader whose honesty is not in doubt and we believe strongly that we owe the people of Ondo State a duty to support and strengthen him to move the state.

“We have all witnessed the unprecedented infrastructural development in the state; the massive road construction as well as the strengthening of the health sector and even the agricultural sector.

“With our departure from the PDP, I can assure you that it is over for the party in Ondo because we are poised to work assiduously to return Akeri to Alagbaka Government House”, he said.

Receiving the defectors to the APC, Governor Akeredolu assured the former PDP chieftains of enough space for them to reach their destined heights.

“Here in our party the APC, we do not discriminate against new members. As a testimony, both the number two and three, that is, the deputy Governor and the speaker were not originally members of the APC. But here they are today. It is possible for all those who are coming on board to reach their heights destined by God and no man can stop it”, he said.

TCN is working to expand the nation’s grid, says management