Highlighting areas that need urgent radical improvement in the nation’s body politic, Governor Fayemi said, “until our democratization process becomes an everyday culture, it would continue to be met with a dissonant disposition among the people generally.”

Looking back, the Chairman of the Nigeria Governors Forum observed that the political elite democratized poverty instead of democratizing hope.

The Governor was a Guest Speaker at the National Institute of Policy and Strategic Studies, NIPSS, Kuru, Jos Plateau State on Tuesday. The occasion was the 2019 Lecture of Senior Executive Course ,SEC 41.

The Chairman of the Nigeria Governors Forum was invited to Speak on “Twenty Years of Democracy: Looking backward, moving forward.”

Dr Fayemi who said that although there was cause to assess our democracy with some trepidation and anxiety, because the journey has exerted sweat and blood from all Nigerians, a lot more needed to be done, moving forward, he insisted, “because it is still an unfinished job”.

On what he intends to leave behind as his legacy after his term as the Chairman of the NGF, the Governor of Ekiti State bared  his mind on two most passionate subjects of his. Fayemi mentioned the rebranding of Governors’ image before the Nigerian population on the one hand and decried the low enrolment in schools nationwide both of which he promised to work hard to mitigate. He underscored the important role that education plays in the future of the country. Governor Fayemi just handed back Christ’s School to its original owner, the Anglican Church, in Ekiti State.

He also touched on security, but explained that, it’s not just the elite that should carry the can for insecurity in the country, but all Nigerians, because “culpability comes from both sides.”

The participants had tackled  Dr Kayode’s  with their engaging questions, delving into how governors see themselves, why successive governments (read: Governors) jettison or totally discard their predecessors’ programs and why policies are not institutionalized.

When it was time to respond, the NGF Chairman fired from on  cylinders. “Institutionalization”, he hinted, “is an elephant in the room” because before now our governments did  not have long term development plans. Fayemi proceeded  to challenge the nation’s political elite to entrench rules along the sides of long-term development planning.

He however regretted that this is not likely to happen because the interests of the elite are consistently being mistaken for national interest.

“The system itself is rigged against institutionalization,” Dr Fayemi further attributed this misnomer to the fact that many now see politics as their professions. “If you’re in politics and you have an alternative address, politics becomes easier.”

Although sub-judice, the NGF Chairman shed some light on the NFIU order which seeks to compel disbursements of Local Government Funds directly to the LGs. He said it  is still in court as Governors are asking the courts to clearly define what the powers of the NFIU were.

In his efforts to restore the people’s confidence in their state governors, the governor of Ekiti state explained that the people’s fears regarding Local Government funds were unfounded. He said the quality of people in the leadership of the country, especially governors has improved significantly, stating that “Governors are not out to pilfer public funds”, Governor Fayemi explained, stating that in “Ekiti State for example all transaction are carefully documented.”

At a Forum at the University of Lagos a fortnight ago where he delivered another lecture, Fayemi had admonished that “if you, referring to the university community, men of intellect and integrity do not join politics, you shall be ruled by your inferiors.”

The former teacher and activist, at the commencement of his speech describe the National Institute of Policy and Strategic Studies as “a home away from home”, because some decades ago he had been there to work on his dissertation at the Institutes Library. He also stated that while he had delivered a paper o security at the institute earlier this year, a team of participants had also been in Ekiti State recently and they were warmly received by his government.

Before Dr Fayemi began to speak, he, in a very somber tone, commiserated with the bereaved families of the students who died in FUOYE and insisted that justice would no doubt take its course once the culprits were identified.

The Director General of the Institute, Professor Habu S. Galadima who had earlier, along with the management of the Institute, received the Governor in his office, thanked Dr Fayemi for honoring their invitation.

He said the Institute was working at expanding the content of the it’s courses and the number of participants to 78. It is currently 66. He requested the governor to be kind enough to establish the presence of his state government at the Think-tank; “let the world know of Ekiti State at NIPSS,” the Director General of NIPSS pleaded. 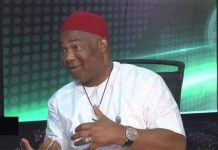 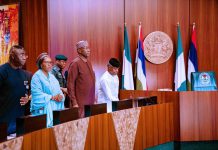 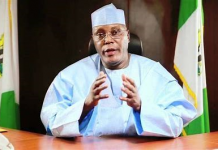 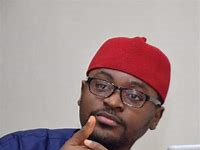