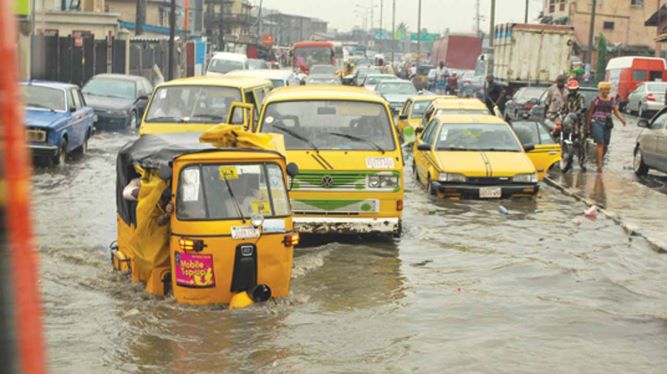 Lagos State Government has urged residents of four local government areas to relocate from a highly probable flood risk expected between now and September.
Mr Tunji Bello, Commissioner for Environment and Water Resources, made the appeal in a statement on Thursday in Lagos.
Bello said that should the residents fail to relocate, they should of wary of the impending flood.
He said that Lagos Mainland, Mushin, Ibeju-Lekki and Ikorodu would witness more high intensity rainfall between now and September.
He, therefore, urged the residents, especially those with structures in low lying areas, to relocate during this period to avoid any untoward incident such as loss of lives and property.
He said that forecast from the Annual Flood Outlook released by the Hydrological Services Agency on May 28 this year said the four councils would be most hit by flood.
The commissioner also identified 14 other local government areas as likely to face probable flood risks this year but might not be severe as the four forewarned.
He listed the 14 local government areas included Lagos Island, Alimosho, Amuwo Odofin, Ikeja, Kosofe, Eti-Osa, Apapa, Ojo, Oshodi/Isolo, Agege, Ifako Ijaiye, Badagry, Surulere and Ajeromi-Ifelodun.
Bello stated that the ministry would clear and clean the drains of pet bottles and styron foams as exemplified by the efforts of the Emergency Flood Abatement Gang all over the black spots in the state.
He added that it was regrettable that several heaps of pet plastic bottles and solid waste were daily being excavated from the drainage channels in areas like Mushin, Idi Oro, Idi Araba, LUTH and Mile 2.
He stressed that investigation had showed that some traders, especially in Mushin, dump waste from their daily sales and articles straight into the drains, thus inhibiting the free-flow of water into the channels.
He urged residents to desist from clogging drainage channels with refuse, especially those cleaned up recently, adding that the unpatriotic act of some residents had put the lives of those working on the drains in danger.
Tunji Bello said anyone caught dumping refuse in any drainage channel would face the full wrath of the law.
He appealed to residents of Bariga who had been adversely affected by sand filling being carried out in the area to bear with the state government.
Bello said that the ministry was working assiduously to ensure that the alignment in the area was properly restored.
(NAN)
Please follow and like us:

Atiku Abubakar is no Longer our shareholder, says Intels