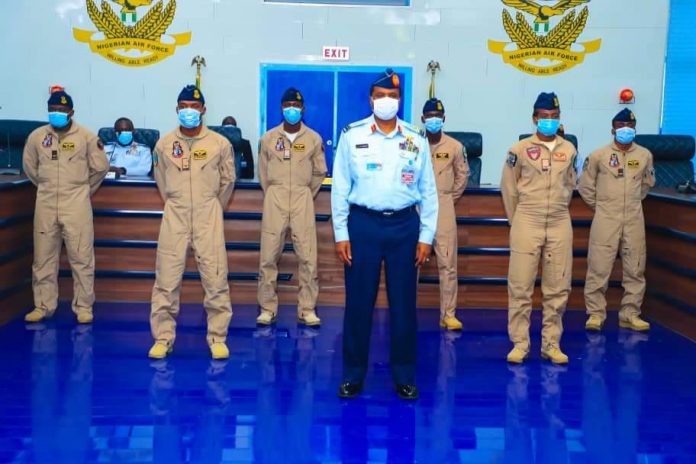 In furtherance of its capacity-building efforts to tackle various internal security challenges in the country, the Nigerian Air Force (NAF) has graduated another set of 6 pilots in tactical and basic flying.

In a statement, Director of Public Relations and Information, Nigerian Air Force, Air Commodore Ibikunle Daramola, said the combined graduation ceremony, which took place on 29 September 2020, comprised 2 pilots of the Tactical Flying Course 24 (Batch B), and 4 student pilots of the Basic Flying Course 19 (Batch A).

He said among the graduands awarded Limited Combat Rating Certificate after completing the Tactical Flying Course on the Alpha Jet aircraft during ceremony was the first female fixed-wing fighter pilot in the history of the NAF, Flying Officer Kafayat Sanni.

In his remarks, the Chief of the Air Staff (CAS), Air Marshal Sadique Abubakar, who was also the Guest of Honour, noted that human capacity development, being one of the Key drivers of his vision, has received much attention since he assumed office as the twentieth Chief of the Air Staff.

“This is evident in the number of personnel that have been trained in various courses, both locally and overseas. Indeed, today’s graduation brings the total number of new pilots winged since 2015 to 118, and by the end of 2020, the NAF would have completed the training and winging of 139 pilots, which is a glowing testament to the efficacy of our capacity building initiatives.

“These pilots have continued to add value to the efforts of the Service in dealing with security challenges in the North East, North West and other parts of the country” he said. The CAS further stated that, while a good number of NAF officers were undergoing various pilot training courses outside the country, the indigenous training institutions had continued to play a crucial role towards the attainment of the NAF’s capacity building initiatives,” Abubakar said.

He expressed satisfaction that 403 Flying Training School, Kano and 407 Air Combat Training Group, Kainji, where the graduands were trained, had continued to set the pace in the provision of high-quality fighter pilot training.

While encouraging the 4 newly-winged pilots, the CAS reminded them that they cannot afford to rest on their oars at this time, as the feat they had achieved also comes with a burden of responsibility with so much expected of them, not only by the NAF but indeed the Nigerian people, whose scarce resources were used to train them.

He therefore urged them to continue to give their best to the Service and the Nation.

Addressing the operational pilots, Air Marshal Abubakar, stated that their 18 months was deliberately made tedious with a series of training sorties and several tactical maneuvers executed to the high standards expected of NAF fighter pilots.

According to him, “all these were aimed at giving you the requisite skills to prepare you for the tasks ahead. I must emphasize that, now that you have earned your Limited Combat Rating, you will be required to work harder and fly with more precision in order to meet up with the expectations of Nigerians in the various operational theatres.

“There shall be no hiding place for armed bandits or terrorists in any of our forests.”

The CAS expressed particular delight that Flying Officer Sanni, who was decorated with her pilot wings as the first female fixed-wing fighter pilot in the history of the NAF on 15 October 2019, had made history yet again, by successfully completing the Tactical Flying Training on the Alpha Jet aircraft.

He noted that Flying Officer Sanni and her colleagues were now better trained and prepared to be deployed for combat missions in the ongoing counter-insurgency air operations in the North-East and other parts of the country.

“You will go down in the history of our Nation as the first female fixed-wing fighter pilot to undertake combat missions in defence of our freedom and sacred values.

“You will be undertaking combat missions to assert our right to our territory and protect the lives and property of our people”, the CAS added.

Air Marshal Abubakar further noted that the NAF’s ability to effectively and efficiently project Air Power has also been significantly enhanced by the Federal Government’s support in the areas of platforms acquisition and reactivation as well as training and approval to expand NAF’s field units.

He therefore appreciated the President, Commander-in-Chief of the Armed Forces of the Federal Republic of Nigeria, President Muhammadu Buhari for his unflinching support to the NAF.

The CAS also appreciated the National Assembly, especially the Chairmen and members of the Senate and House Committees on Air Force for their continued support to the Service.

In his welcome remarks, the Chief of Training and Operation, Air Vice Marshal (AVM) James Gwani, noted that the graduation of the pilots further lends credence to one of the Key Drivers of the CAS’ Vision, which is “Human capacity development through robust and result oriented training for enhanced professional performance”.

He added that the graduation of the pilots would undoubtedly further enhance the NAF’s capacity for effective, efficient and timely employment of air power in response to Nigeria’s national security imperatives.

While giving the highlights of the 2 courses, the Air Officer Commanding Air Training Command (AOC ATC), AVM Musa Mukhtar, stated that the Basic Flying Course 24B, which commenced in March 2019, comprised 2 phases; the ground academics and flying training phases.

He noted that the ground academics phase lasted 14 weeks, covering subjects such as Aerospace Physiology, Aircraft System and Aircraft Operation Orders, amongst others.

Areas covered in the flying training phase, which required each student to fly an average of 130 sorties, included General Handling, Instrument Flying, Navigation as well as Night and Formation Flying. He remarked that the Tactical Flying Course 19A, which lasted 18 Months, was also conducted in 2 phases, the Conversion and Tactical phases, covering Air to Ground Weapons Delivery Theory, Tactical Deliveries and Mission Planning, amongst others, with each trainee flying 35 and 40 hours in each phase, respectively.