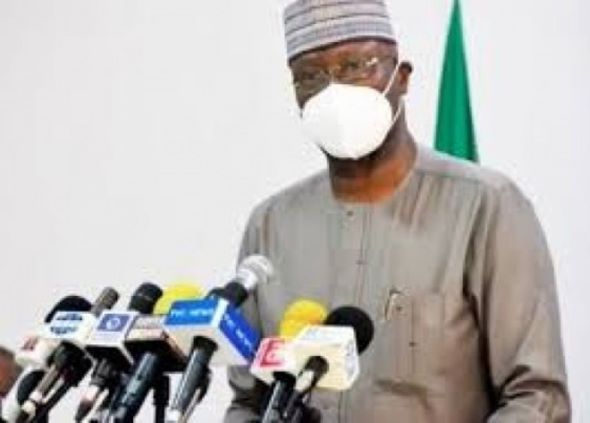 The Presidential Task Force (PTF) on COVID-19 has threatened to sanction travelers who refused to present themselves for a mandatory in-country Polymerase Chain Reaction (PCR) test.

Chairman of the PTF and Secretary to the Government of the Federation (SGF), Mr Boss Mustapha, made the disclosure in a media briefing on Tuesday in Abuja.

Mustapha said that the need had arisen to activate the sanctions which included the suspension of passports of such defaulting individuals for a period of six months minimum or outright visa cancellation.

The PTF had earlier urged individuals traveling to Nigeria from any country to take a COVID-19 PCR test and have a negative result before traveling.

He also urged them to stay in self-isolation for seven days on arrival in Nigeria and take another COVID-19 PCR test on day seven.

Mustapha raised alarm over failure of some Nigerians who arrived from abroad to present themselves for the in-country PCR test which they signed up to and paid before arrival.

“It has, therefore, resolved to revoke passports of travellers that fail to conduct the mandatory COVID-19 PCR test,” he said.

According to the SGF, only one out of three Nigerians who arrived have complied.

Recall that on Sept. 18, the Federal Government had announced that it required a negative COVID-19 PCR test within five days (120 hours) before departure.

“The PTF had also in September said while Nigerians will get six- month passport suspension, foreigners face outright visa cancellation.

“The PTF had said Nigeria placed travel bans as part of the global lockdown measures to contain the spread of the pandemic in March 2020.

It had stressed that it was mandatory that travellers have the PCR test done on day 7th upon arrival.

“It had also said all returning travelers to Nigeria must have tested negative for COVID-19 through PCR testing in the country of departure.  The PCR test must now be administered no more than 120 hours before departure.

Mustapha said that the PTF was highlighting these issues repeatedly because they remained at risk of importation, having opened the airspace and massive spread as a result of the protests.

“The next week or two remain critical. The PTF has noted with sadness the failure of Nigerians who arrived from abroad to present themselves for the in-country PCR test which they signed up to and paid before arrival.

Statistics emerging from our records show that only one out of three passengers have shown up for the in-country test.

“As you may recall, the PTF announced the guidelines on the reopening of the airspace and the obligations of arriving passengers.

The SGF said as part of the strategy of the PTF to deepen community engagement, he addressed an emergency session of the National Executive Committee of the National Council of Traditional Rulers Tuesday.

He noted that the contributions of traditional rulers to the successes so far recorded in the National Response could not be overemphasized.

“Accordingly, I acknowledged and thanked all our traditional rulers for their support and urged them to continue to do more especially in the areas of risk communication and community engagement.

“Adherence to the Non-Pharmaceutical Interventions measures and the need for people to come out for testing were emphasized.

“Finally, I wish to inform you that the PTF has revised its meeting and briefing frequency to once a week, to allow members carry out other functions and activities.

“This does not preclude the need to call for emergency meetings and briefings when the need arises. With effect from Thursday, 5th November, 2020 therefore, the national briefing will only hold once, weekly.” (TNG)